Last weekend was Bike Bash weekend here in town. I’ve been wanting to participate in one of the Bike Bash group rides for a few years now, but it’s never worked out. There were thunderstorms, travel conflicts, um…hangovers. You know. Even though I’ve had it on my calendar as a possibility every year, it’s just never happened until this year.

There are a variety of rides you can choose, from 3 miles up to about 30 miles. Since this would be CW’s and my first outdoor ride of the season, we opted for the 20 miler. Enough distance to get some time in, but not enough to make us wish we were better prepared or to lament the state of our saddle areas afterward. It turned out to be just right. 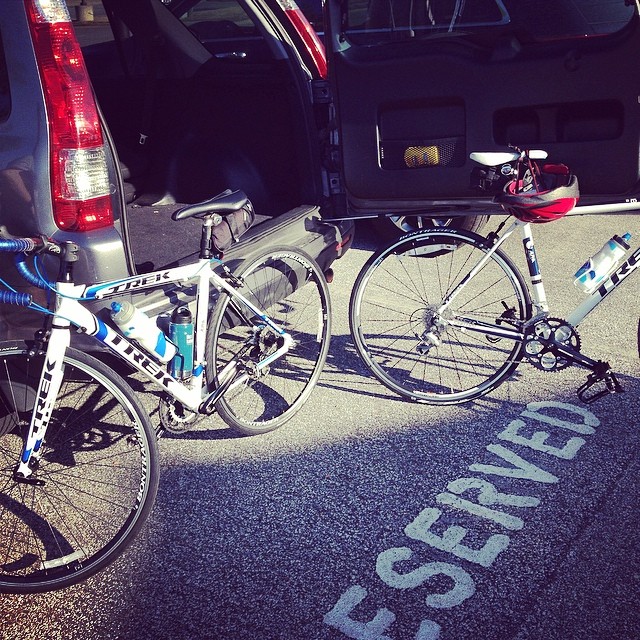 The city really gets everything set up well for this event. They had all kinds of food and entertainment set up at the start location, including a booth for our local bike shop in case you needed anything. We got there a little early to pick up our registration bags and then kinda hung out waiting for our group to take off.

I had been worried about keeping up with everyone (I tend to be slow on the bike), but it was mostly no problem. We hung with the rest of the group pretty well until a little past the halfway point when we got separated at a stoplight (the people ahead of us just made it through and the last 5-6 of us had to stop). At one point, I managed to catch back up with the group ahead, but I turned back to look for my husband and he was nowhere in sight, so I waited for him and let the group go.

Over all, it was really fun — we chatted with some other people around us, took in the scenery, and did our best to enjoy the absolutely miserable spring weather. It was sunny with a few puffy clouds, tons of flowers and trees blooming, a light breeze, and clear, dry roads. Terrible, I tell you what.

The police helpfully appeared at a few key intersections to stop traffic for the cyclists, allowing us to navigate some potentially tricky areas with ease. As a rider who easily gets nervous about traffic, I really appreciated this aspect. I just kept thinking why can’t we get them out here for every weekend ride? 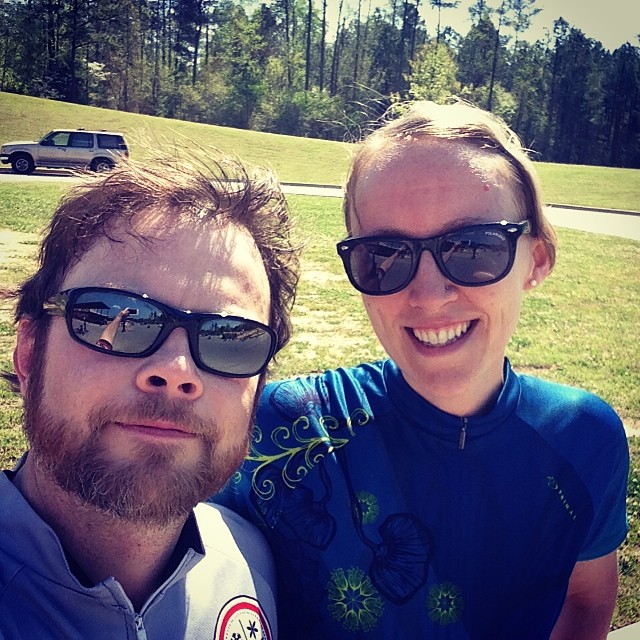 In the end, we had a blast. We made it back to the starting point in about 90 minutes — not a fast ride, really (I think my husband wanted to go faster most of the time — except apparently for the one time when I lost him while I was playing Bridge The Gap), but a great first outing for the spring. I am really looking forward to getting out for some long(er) weekend rides this summer. Once the crazy texting-while-driving college kids kinda clear out of town, the roads will be mine. MINE I TELL YOU MIIIIINE.