The other day I was home alone for the majority of the workday (summer classes are done and I haven’t yet started fall prep or any other work projects) and I had no work-work to occupy my time. I watched one or two episodes of Buffy while eating breakfast and drinking coffee, and then, restless and fully caffeinated, I commenced — mostly unintentionally — something I like to call an Awesome Day of Domesticity (see also here; apparently I like to document these days).

Here’s how those things usually go for me:

It all begins when I think of one thing I want to do around the house (such as dusting). I usually think of the task because it happens to be staring me in the face (such as when I go to set my coffee cup down on the coffee table (as you do) and notice how horribly dusty the dark wood looks in the slanty early-morning sunlight).

Then, I realize that I can’t even reasonably do that one task because something else necessarily has to be done first (such as vacuuming — I am a believer that vacuuming with our cheap machine kicks up dust and therefore must be done pre-dusting). So before I can dust, I must vacuum.

Once I believe I have identified the Root Task, I start there and make every effort to make my way on a linear path through the remaining items on my to-do list. (Kitty Bathroom, Vacuum, Dust — if you’re following along.)

What inevitably happens, though, is that along that path I keep getting waylaid by other related (or merely spatially adjacent) tasks. I walk into the laundry room to get the crate of cleaning supplies and see that I left laundry hanging to dry, so I go to put it away. In the bedroom, I see that I left a water glass on my night stand, so I collect it and put it in the dishwasher, where I see that the dishwasher actually needs to be unloaded, so I do that, and, and, and. Basically, I putter around, and everywhere I go, I see something that needs doing and I do it.

You’ll note that at this point of puttering, I still haven’t even begun what I thought was my Root Task: cleaning the Kitty Bathroom. (And the kitty was of course no help at all.) 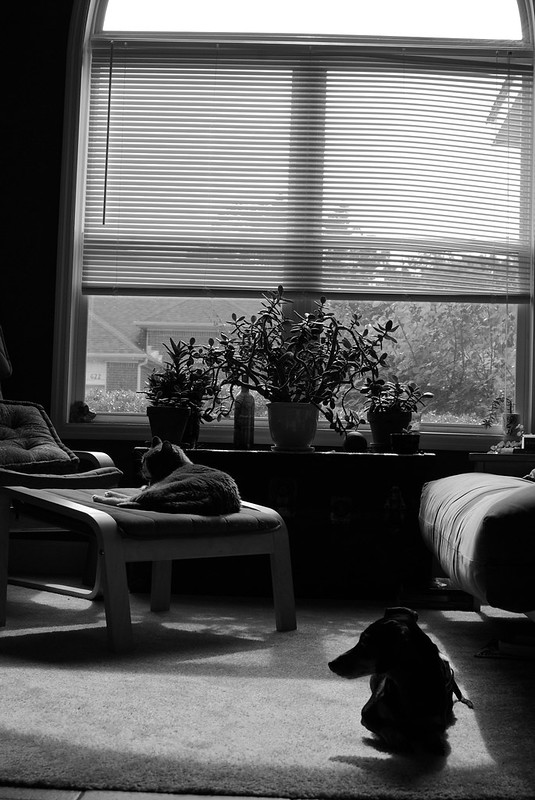 Tangential Mini-Rant: If I were someone who typically engaged in popular hyperbolic use of psychological terms to describe my own adorably quirky* behaviors, I would probably winkingly describe the above sequence of events as a combination of OCD and ADD. However, I respect people who actually do deal with those issues and I refuse to be cutesy* in my use of these kinds of terms.

Extra-Tangential Mini-Rant: See also the use of terms like “schizophrenic” to describe the weather, which seems to demonstrate a misunderstanding of what schizophrenia actually is. I think people probably mean “bi-polar” when they’re discussing weather that rapidly changes between rainy and sunny, for example, but neither colloquial use is without its problems — especially for those of us who know real people who actually have schizophrenia or bi-polar disorder.

*Not actually adorable or cute.

WHEW. Sorry about those above tangents.

Back to the point: my Awesome Day of Domesticity yesterday, as frustratingly non-linear and unpredictable as it was, led to my cleaning of almost every danged little thing in the house. I did do the dishes, do the laundry (five loads!), clean the Kitty Bathroom, vaccuum, dust, clear of spider webs, deal with dead plants, sweep the patio (where I discovered what I think is a hydrangea about to bloom), tidy the living spaces and guest room, organize just one desk drawer (one I happened to look in — didn’t look in the other; therefore didn’t tidy it), take out the trash, and bake a skillet cornbread. 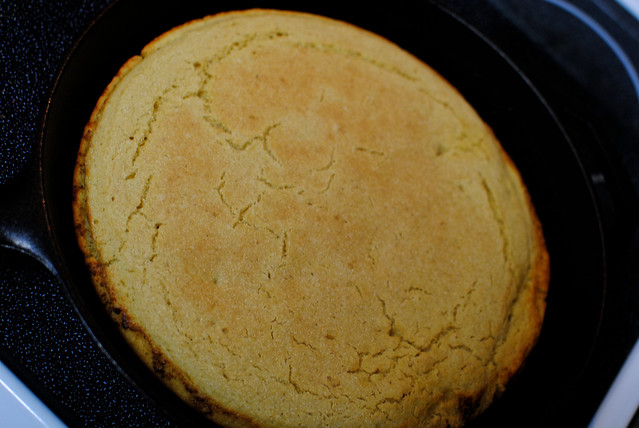 That latter was for dinner, to have with some leftover chili from the freezer. We’re doing a freezer-cleanout/leftover week, which is basically my favorite thing ever: free food we don’t have to cook (because we bought it and cooked it weeks ago). Leave it to me to bake some kind of bread during a “no cooking” week.

At any rate, it was a wonderfully productive day. I do wonder, though, how odd my behavior is. Does any of you get stuck moving from task to task, undertaking way more than you originally intended? Does any of you feel like you live inside a giant to-do list sometimes, where everywhere you look you see something else you need to take care of?

And would any of you like a good skillet cornbread recipe? (My tip: let the batter cook on the stovetop for a minute or two before you put it in the oven.)