Ahoy! So begins the long series of vacation recap posts. I have so many photos and memories, so I decided to just work with one day at a time.

We arrived in Athens on a Saturday afternoon after a long (and long-delayed) flight into Amsterdam, followed by a quick (and just barely caught) flight from Amsterdam to Athens. Taking the metro into the center of the city from the airport proved fairly simple, so we saved some Euros by skipping the taxi.

We had a short walk from the metro station to the hotel during which I was busily trying to figure out which street we were on and which direction we were heading, so I missed looking around at my surroundings in any larger way. My oblivion was to pay off later, however.

Once CW and I had checked into the hotel and gone up to our room, we were faced with two sort of hilarious and baffling situations. Situation the first: 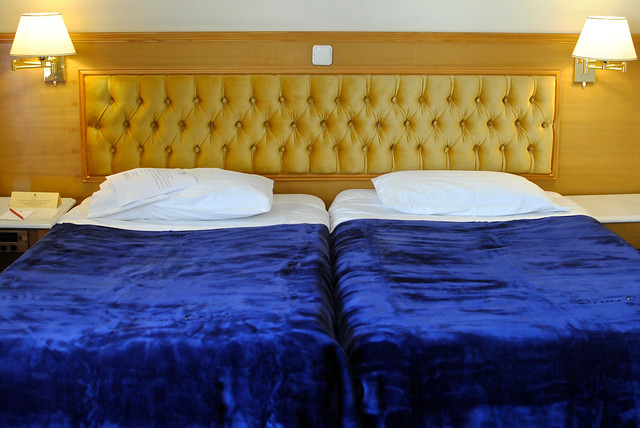 Right. Our honeymoon hotel room had two twin beds. Granted, the beds were pushed together, but still. Separate sheets and blankets on each bed and an annoying chasm between the two.  The man at the front desk was very gracious and helpful when I called, but they said they wouldn’t have a room with one large bed available until at least the next day, and in the end, we decided to stay put.

Baffling situation the second: we couldn’t figure out how to turn on the lights. I needed the bathroom, but couldn’t get the light on in there, so I resorted to using it with the door ajar to let in some window light. Peeing with the door open just added to the already romantic atmosphere, let me assure you.

Do you guys already know what we did not? How to turn on the lights? Well, if you do, you are a savvy world traveler. If not, here’s a tip: there’s a card-reader slot on the wall just inside the door for your room key, and the lights will only work when the key is inserted. Huh. (This also turned out to be the case in our hotel room in Rome, so it may be a widespread thing in Europe; I don’t know.)  At any rate, I declared CW to be a genius and hero when he figured this out.

We wanted to spend the first day figuring out our neighborhood and exploring a bit — trying to stay awake until a reasonable time to go to bed — so we headed up to the roof of our hotel to check out the view from the restaurant up there. When we stepped out of the elevator, we were confronted with an empty restaurant (we later found out it was reserved for a wedding reception that night), so luckily no one was around to hear me not-so-quietly exclaim, upon seeing this view from the edge of the roof, “HOLY SHIT.” 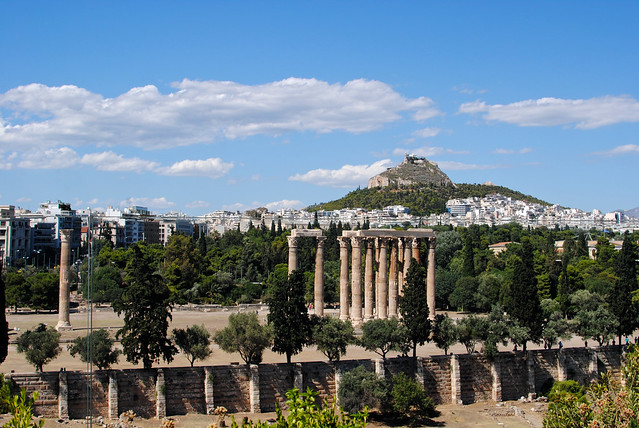 I MEAN. You guys, this view was incredible. Just at our feet was an active archaeological site (foreground), the Temple of Olympian Zeus (the columns in the middle ground), the buildings of Athens, and, in the distance, Mount Lycabettus. When we turned to the left a bit, the Acropolis (with the Parthenon and Erechtheion) was visible. 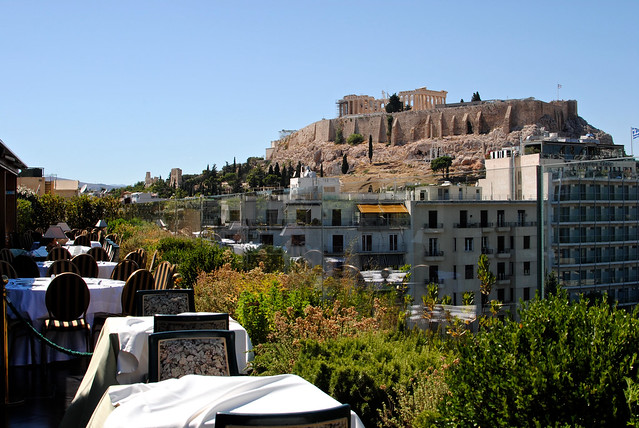 HOLY. SHIT. Amazing. This view turned out to be one of our favorite things about Athens and is absolutely one of the best features of our hotel (which, despite the twin beds and confusing lights, I wholeheartedly recommend).

After gawking at the view like a couple of Alabama rubes, we decided to head out into the city and get a little closer to some of these sites. Our first stop was the Temple of Olympian Zeus, which was just across the street from our hotel.

(In my defense, the reason I didn’t see it on the way from the metro station to the hotel is that we came at the hotel from the side and the temple would have been partially obscured by trees. All the same, I’m glad my first look at it was from the rooftop, because, like I said, holy shit.) 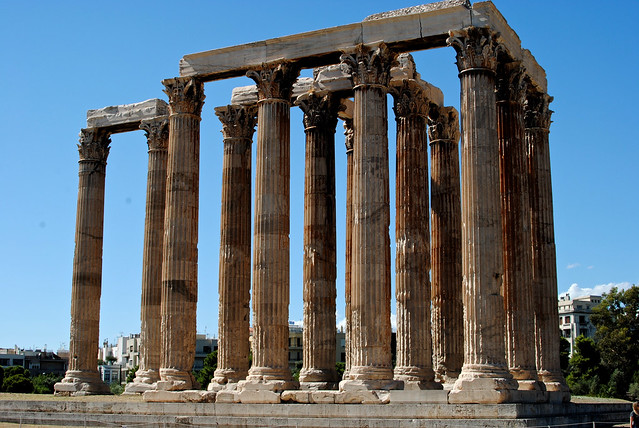 Did I get a little faux-artsy with some black and whites? I did. 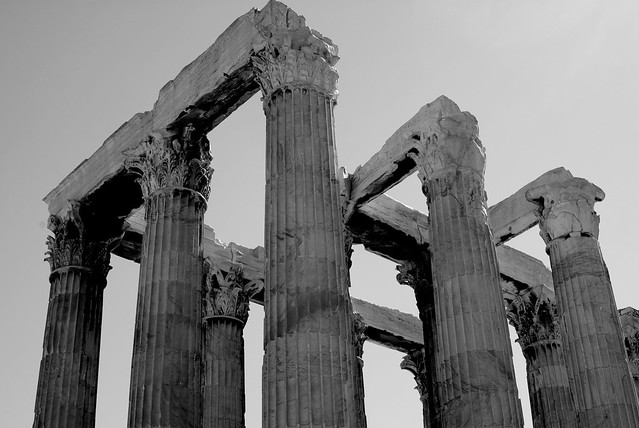 We bought a ticket there that was good for any five (or six?) ancient sites around town and could be used for the next four days. It was a great deal at only 12 Euros, if anyone is interested. We took photos and strolled around the temple site for a good while, enjoying our first taste of the awesome ancient ruins that exist side by side with modern life in Athens. The sun was baking down on us, but we didn’t mind. 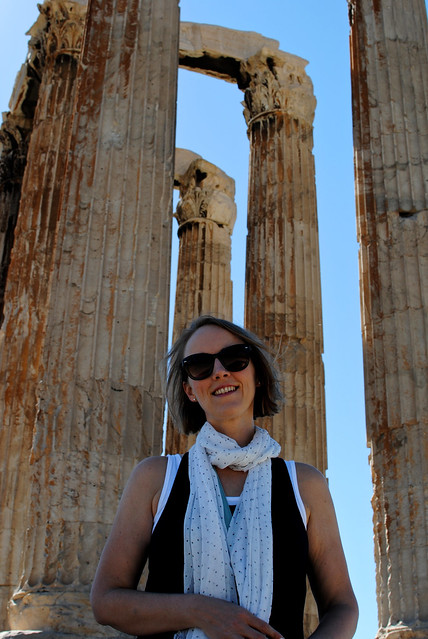 After we got our ancient columns fix for the day, we headed out of the temple area and into the neighborhood that sits between the temple and the hill of the Acropolis, the Plaka. We kind of meandered around for a bit and eventually passed by a beer bar with a nice garden seating area and decided to stop there for a drink and a snack. This was where we had the awesome Ndakos salad that we are going to try to replicate at home (toasted bread topped with tomatoes, feta, capers, olives, olive oil, and fresh herbs).  Our waiter was the first of many extremely friendly and helpful and nice people we met while in Greece. He chatted with us about our trip, helped us with a couple of new Greek words, and brought us a couple of shots of liqueur on the house at the end of the meal. It was a licorice-tasting sweet drink (not ouzo) which I of course promptly forgot the name of.

After eating, we continued to stroll through the neighborhood, and I took too many photos just like this one: 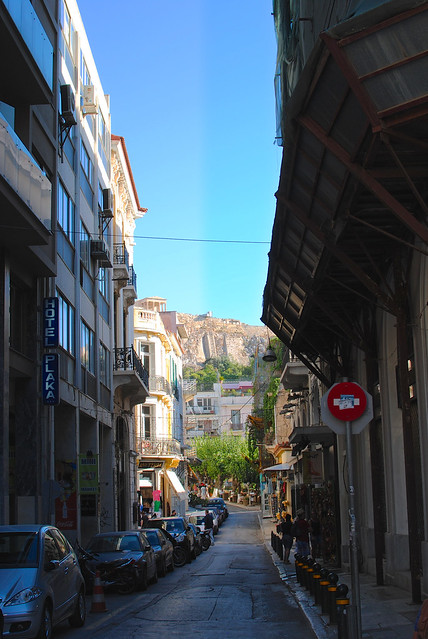 Looking up a narrow street filled with cute buildings, balconies, flowers, etc., with a view of the Acropolis in the distance. Athens is a charming city. See? 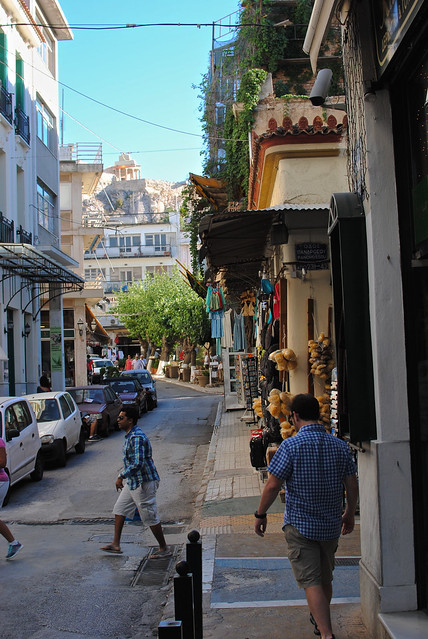 Our final stop for the day was Café Diogenes, where we sat underneath huge old trees filled with lights and had a glass of wine before heading back to the hotel. 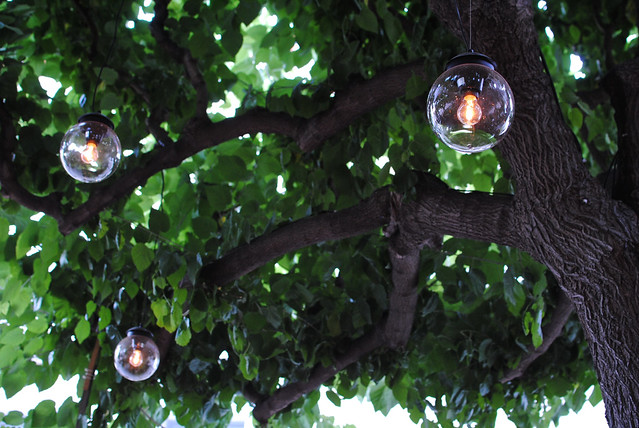 While we sat and lingered over our drink, I fell in love with the house across the street: 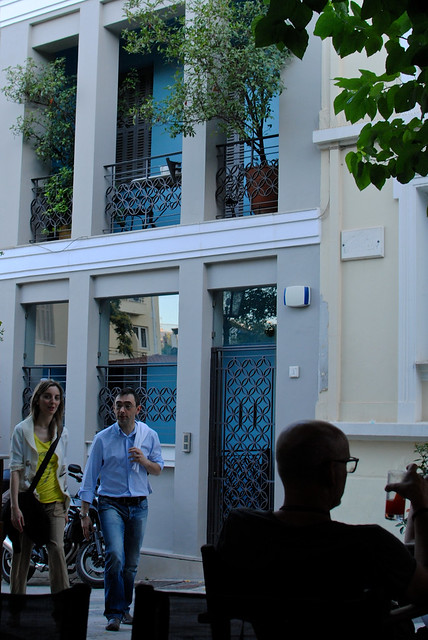 Something about that blue wall, white columns, and ironwork on the balcony just made me so happy. It was situated to have a great view of the square, too, which was full of cafés and shops and so on. This is one of my many Fantasy Greek Apartments, of which I have at least three now.

We decided to check out the hotel pool before going to bed and let me tell you, it was delightful. It’s a pretty little space with comfortable lounge chairs and a bar and both sunny and shady spots. 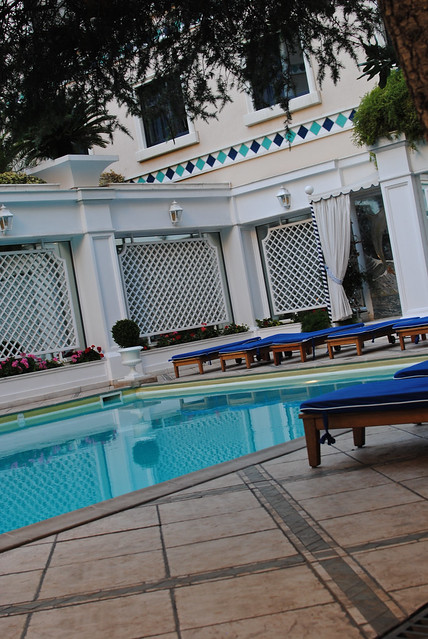 The sun was going down by this point and we didn’t feel like swimming at the time, so we just lounged with a drink and a snack and were happy to be in Greece. 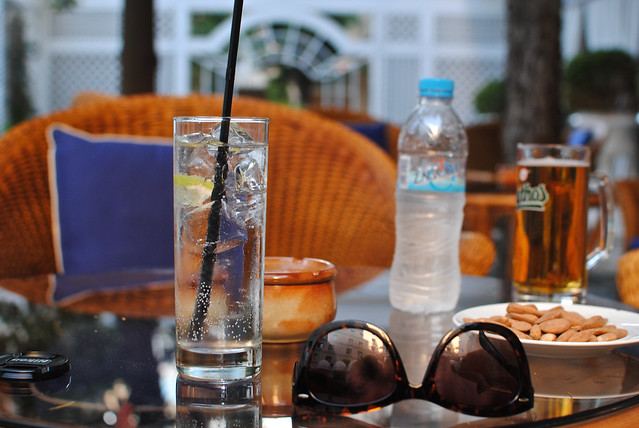 We’d started the “day” at 6:00 AM Central time Friday and by about 10:00 PM Greek time (8 hours ahead) on Saturday, we were ready to pass out. The plan to avoid jet lag was basically just to sleep on the plane as much as possible (I couldn’t), then stay up until a reasonable bedtime the first day in Athens, sleep through the night, get up early, and get going the next morning. This is almost what happened. Stay tuned for the next installment.

Note: you can click on any of the images to see it on Flickr, where larger sizes are available. The complete set of photos from our first day in Greece is here.