Our fourth day in Greece was cruise day! We wanted to be able to see the Greek isles a little, but didn’t want to venture as far out as Santorini or Mykonos, for practical reasons (they’re far away!), so we found this little one-day cruise leaving from Athens that would stop on three of the Saronic Islands just off the coast, Hydra, Poros, and Aegina.

The cruise sent a shuttle to pick us up at our hotel, drove us out to the port in Piraeus (where we had eaten the fabulous octopus lunch the day before), and got us to the boat at about 8:00-ish. 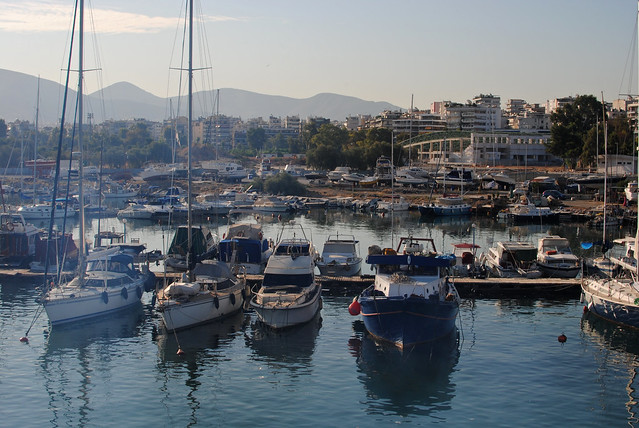 The “fog” you see in the above photo of the port is actually smoke from the boat’s engines. Pleasant! We settled in on the boat and found a spot to sit, got ourselves a couple of cappuccinos, and prepared for the ride to Hydra. The wind was practically blowing the Tourist Hats right off our heads, but look how nicely the flag was waving: 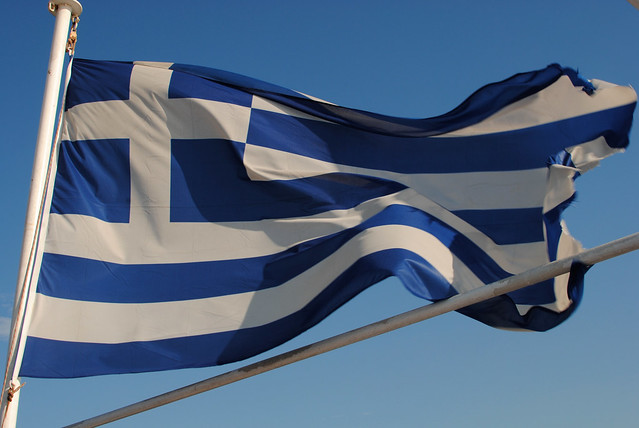 It was a pretty big boat, I guess, but compared to what? What do I know about boats? It was bigger than the 20′ sailboats I learned on in Oregon, and smaller than a big cruise ship. It had three decks. It was a hydrofoil, if that means anything to you. (It doesn’t to me.) There were maybe 100-200 people on it? I don’t know. Here, let me stop trying to share vague information about the boat and show you this photograph of a beer, tilting precariously as we rocked in the sea. 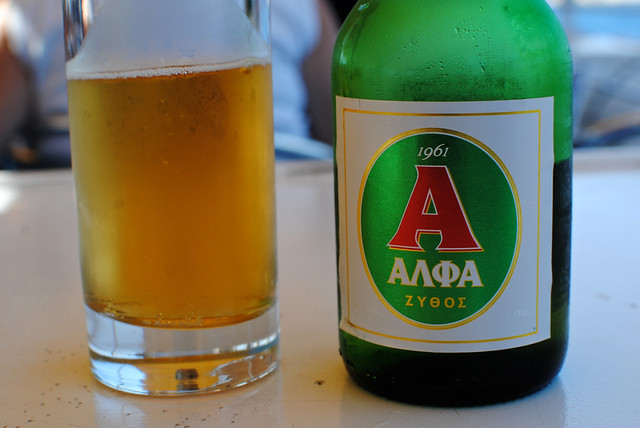 We spent a lot of the outgoing trip being entertained by the ship’s crew (traditional Greek music and dance) and being briefed on the day’s schedule and related activities — essentially, don’t be late for departure at any ports or you’ll be left behind; here are some tours you can purchase for your time on the islands. We didn’t want to do any tours but rather spend our time as we wanted in the moment, so we just made a note of the schedule and got ready for our first stop, the island of Hydra.

I will just tell you that Hydra was by far my favorite of the three islands we visited, and if I had it to do all over again, I would have just booked ferry tickets to and from Hydra to spend the entire day there instead of a cruise with stops on other islands. Hydra is the business and I could spend a LOT more time there and be as happy as a clam. HYDRA 4 LIFE. 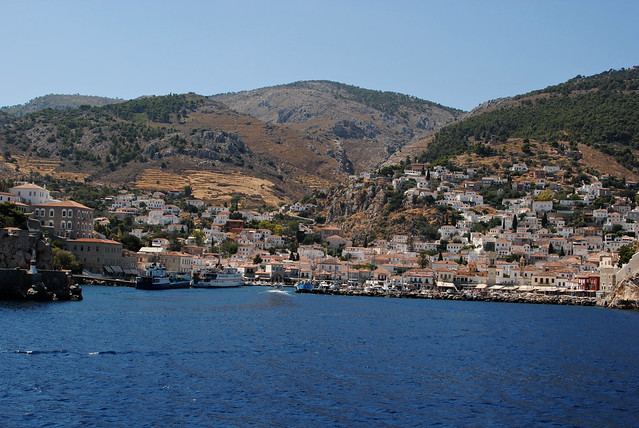 One interesting thing about Hydra is that the island does not allow cars. These donkeys and their colleagues are kept busy hauling people and goods all around the island — which is not easy work! The island is full of seep climbs, narrow alleys, and lots and LOTS of stairs. 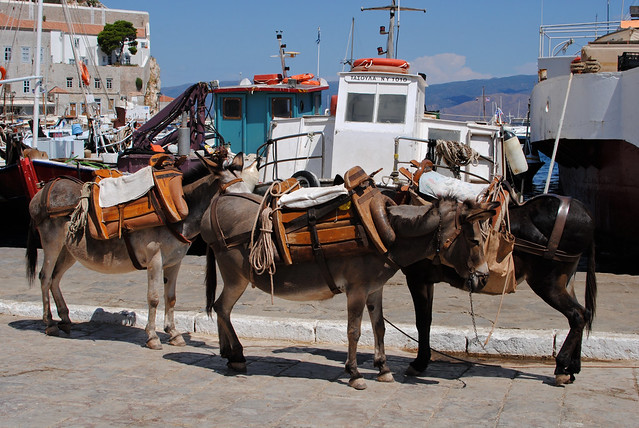 It is also absolutely gorgeous. 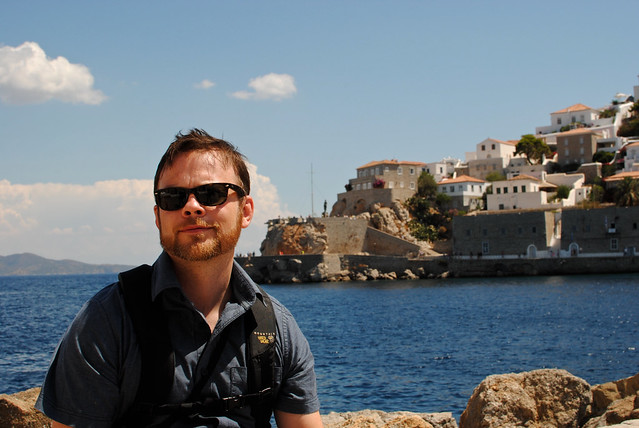 Could you please look at this water? I’m sorry; ignore these half-dressed European strangers. They are just trying to get their swim on in peace. 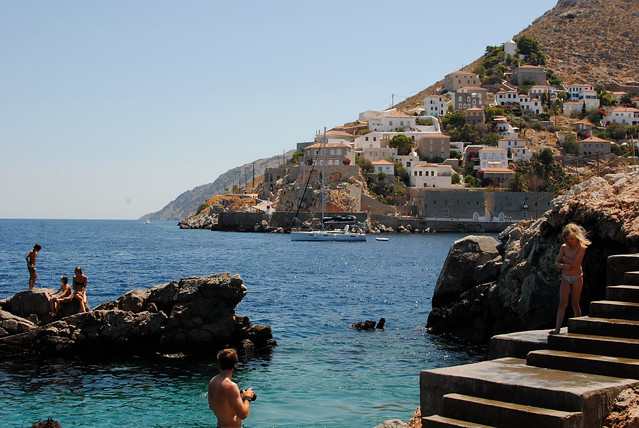 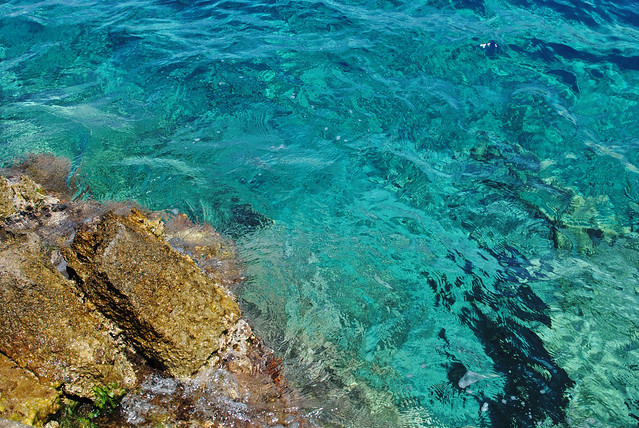 Yeah, that is the actual color. The Aegean Sea is BLUE, y’all. It is not joking around. 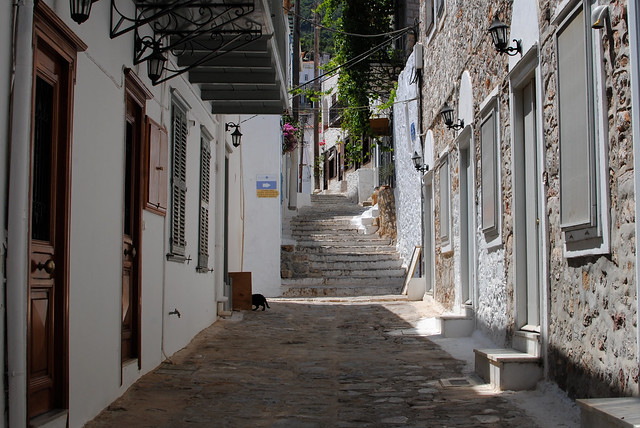 The entire island is pretty in every detail. As we explored the streets leading up away from the water’s edge, we found something special around every corner. It just has that magical feel of surprise and discovery — little secret alleys and staircases hidden around every turn, with pretty houses and gardens and then narrow passages that suddenly open up to unexpected views of the sea below. 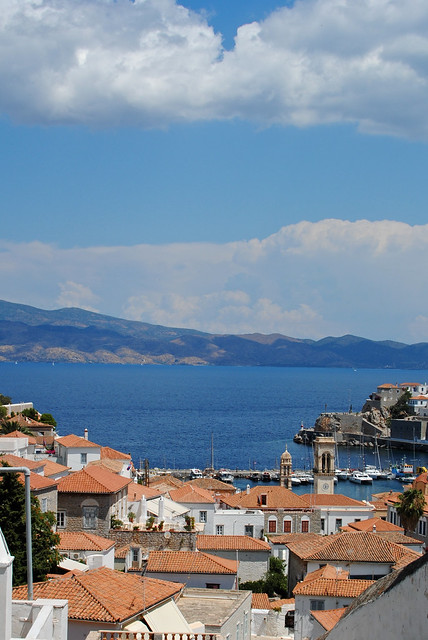 As you can tell, I got a little enamored of the pretty doors, windows, and shutters along the way. 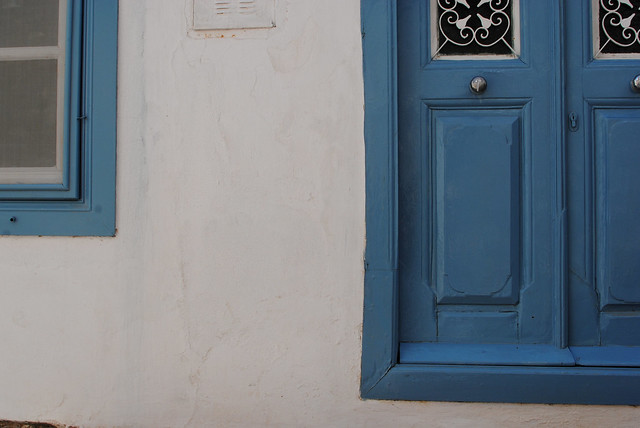 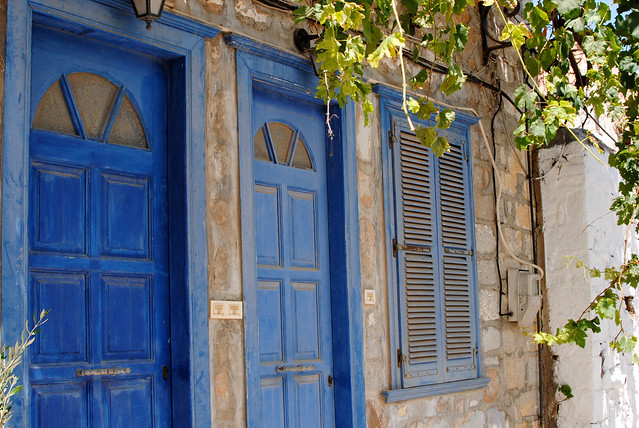 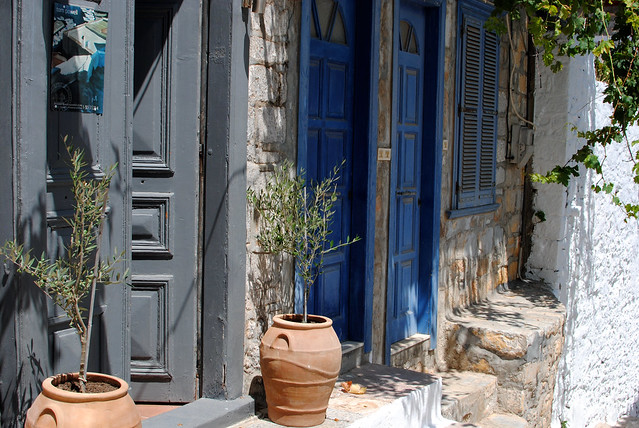 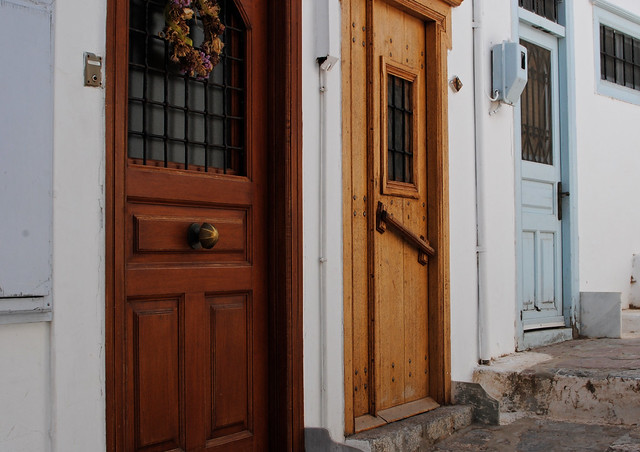 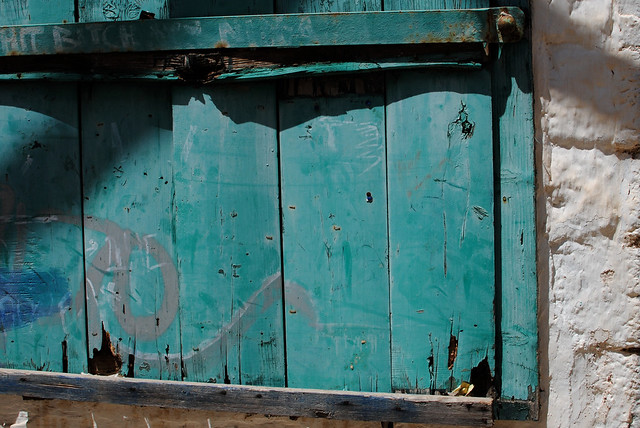 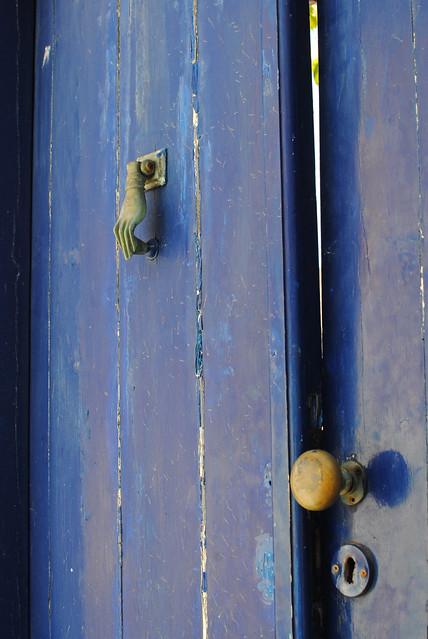 That door knocker, though.

I think I could happily move into one of these pretty white houses on Hydra and never leave. 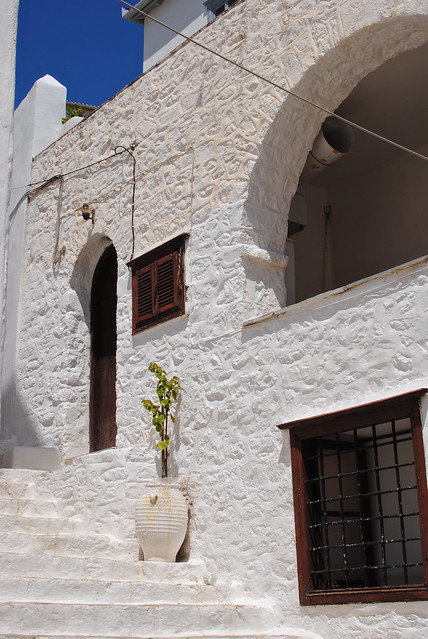 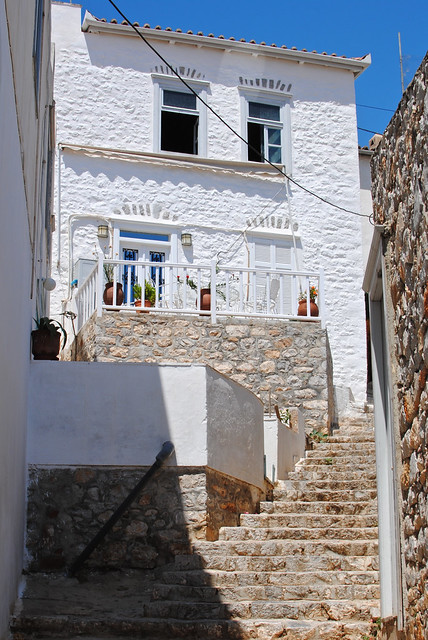 (See all those stairs? Those poor donkeys.)

Sadly, though, we did have to leave all too soon. The only problem with our cruise was that it didn’t leave us enough time to really explore or thoroughly enjoy any of the places we visited. I assume they kind of market themselves on the notion of three islands in one day, and hey, maybe it’s something to say “I visited three Greek islands,” but yeah. I would have liked more time on just one island.

So we hopped back on the boat where we were treated to a catered lunch buffet and soon enough we had reached stop number two, Poros. Isn’t it pretty? 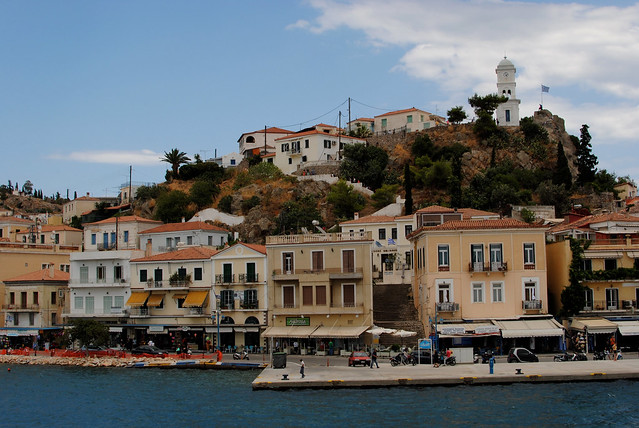 I hope you enjoy this one picture of the port, because that’s all you’re getting. We were tired after the heavy lunch and only had about 45 minutes on Poros (why? Seemed like an unnecessary stop if we were only getting 45 minutes), so we opted to find a coffee and sit and watch the marina until it was time to go. This proved to be a lovely and low-key way to enjoy the brief stop.

Our last island was Aegina, and we had a much longer stop there. This was the place where we could have opted to go on a tour of an ancient temple or be ferried to a swimming beach, but we wanted to walk around and explore on our own, which we did. Aegina had a big marina that was a pretty photography spot: 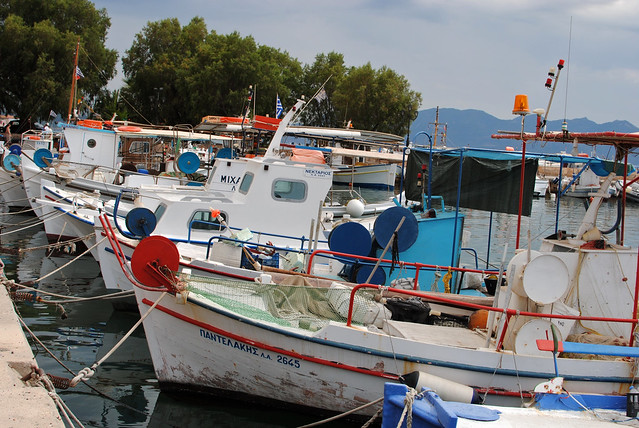 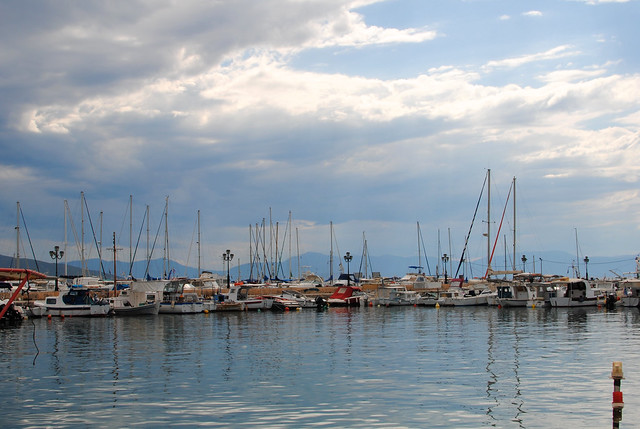 And the colorful streets had a fun and different feel from the mostly white streets of Hydra. Lots of bright-colored buildings — and cars — gave Aegina its own vibe. 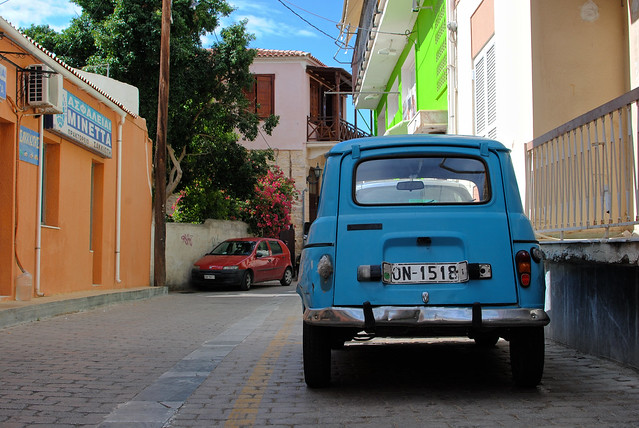 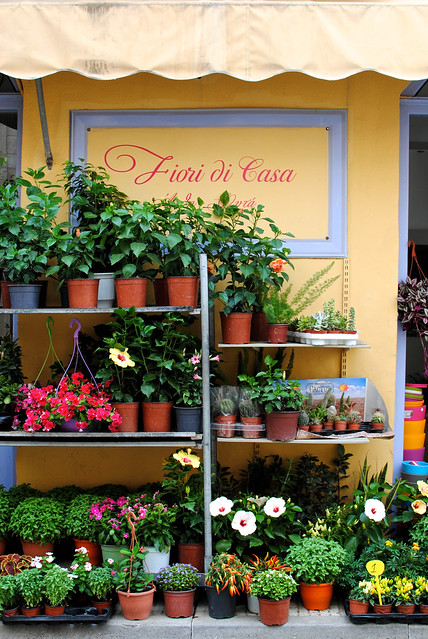 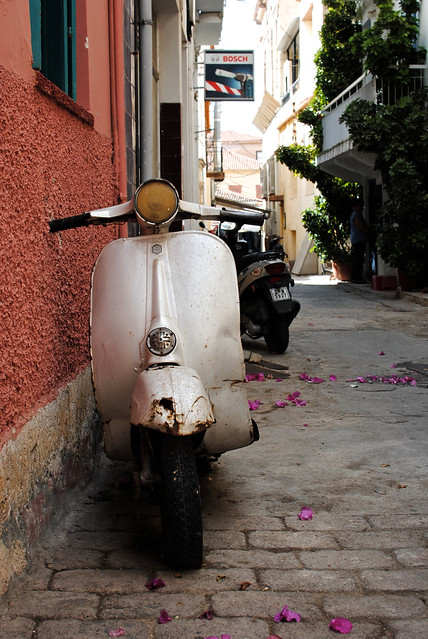 It happened to be siesta time, so a lot of the stores were closed for the late afternoon. We did do a little browsing and window shopping, however, and enjoyed the walk around town. We eventually stumbled upon a little café that had a quiet, hidden stone courtyard with trees and plants growing in it and a very relaxed atmosphere.  The half liter of house wine (favorite thing ever!) was served in this lovely metal carafe, which I would like to have for my own: 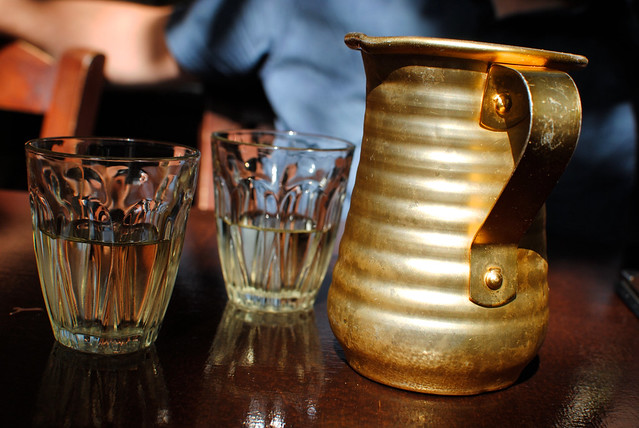 My journal reports to me that the half liter cost only 3 Euros, but my husband begs to differ and says we never got it for any less than 4 Euros. At any rate, it was a good deal and a lovely place to sit and relax and enjoy the local flavor.

We made our way back to the boat by way of a shop that was selling pistachios, for which Aegina is very well known. Those pistachios did not last long enough to come home with us. Definitely should have bought an extra bag! 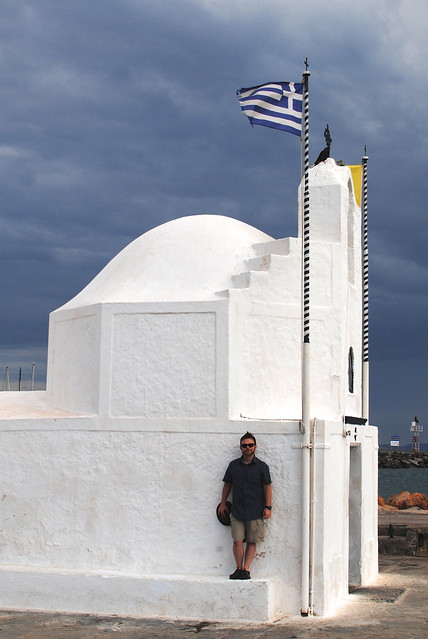 We snapped a few more photos while waiting to get back on the boat, and then buckled in, figuratively, for the journey back to Piraeus/Athens. 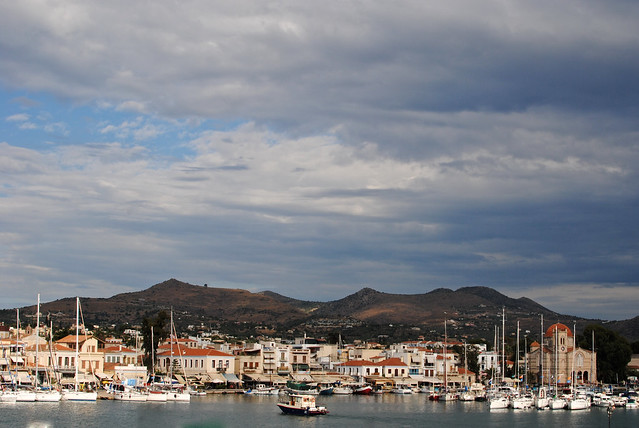 So long, Aegina! So long, boat! Once we returned to Athens, we grabbed a late dinner back at Diogenes, where we’d had a glass of wine our first night in town. The food was good but our poor waiter was frazzled (“too busy,” he reported), broke a glass, and accidentally gave us 20 Euros too much change. (Don’t worry, we fixed it.) Kind of a funny dinner, but I felt bad for the guy — it was obviously not his night.

Although we’d spent many hours sitting on our butts on the boat, we were both pretty tired by this point. A life of leisure really takes it out of you, doesn’t it? Too much cruising. The next day was to be our last full day in Greece, and we definitely made the most of it. Stay tuned.

You can see the rest of the photos from day four here. If you missed any of the other day-by-day recaps, you can also check out days one, two, and three.