Our day started with one final beautiful breakfast on the roof of the Royal Olympic Hotel before we had to catch a crowded Metro to the airport. Before leaving the hotel, a bar/mirror/temple selfie was in order. So many of my favorite things all in one photo. Heh. 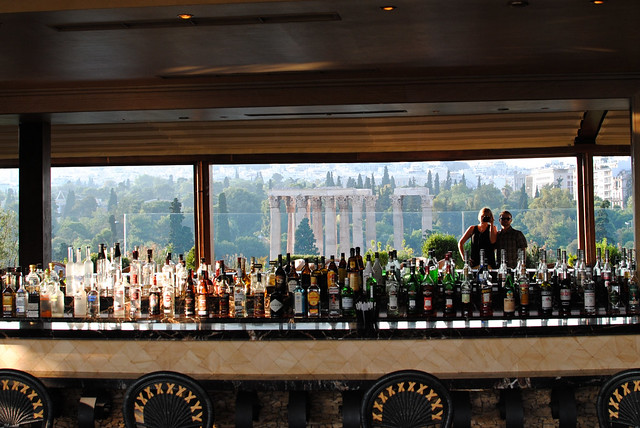 Getting to the Athens Airport was simple enough, but going through their security was…interesting. The woman in front of me had packed all of her liquids haphazardly, not in a baggie, and several of them were above regulation size. A shocking display, really. The security agent was going through every last item in her bag and trying to explain that the liquids had to be 100 milliliters at max.

“No, one hundred DOLLARS. This cream cost ONE HUNDRED DOLLARS.”

“IT COST ONE HUNDRED DOLLARS.”

This went on for quite some time until the Woman with the Expensive Cream finally decided to just check her bag. Meanwhile, the security agent running the X-ray machine accused me of having a tablet in my bag that I hadn’t removed, and I was all, no, definitely no tablet here, friends until my husband was all, um, what about your Kindle? Oh. Fine. Kindle. (They just made me remove it and re-x-ray — no big deal.)

Soon enough we were on the plane and heading for Rome. The previous night’s excesses (ouzo! house wine! prosecco!) were taking their toll on me, and for the first time in my life, my stomach rebelled against flying. Things were tense, but I kept it together.

On arriving in Rome, we took the Leonardo Express train from the airport to the main train station in Rome, just a couple of blocks from our hotel. After being spoiled rotten by the Royal Olympic in Athens, our very reasonable and totally fine hotel in Rome was an adjustment. (Fancy hotels in Athens right now are actually cheaper than modest ones in Rome, so we were also now paying more and getting less, which added to the sting.)

Once we had a chance to freshen up, we decided to get out of the hotel room and get the lay of the land. Our neighborhood exploration began with finding the Papal Basilica of Santa Maria Maggiore, which is just a couple of blocks from where we were staying and served as a good landmark (“our” Basilica) for the duration of our stay. 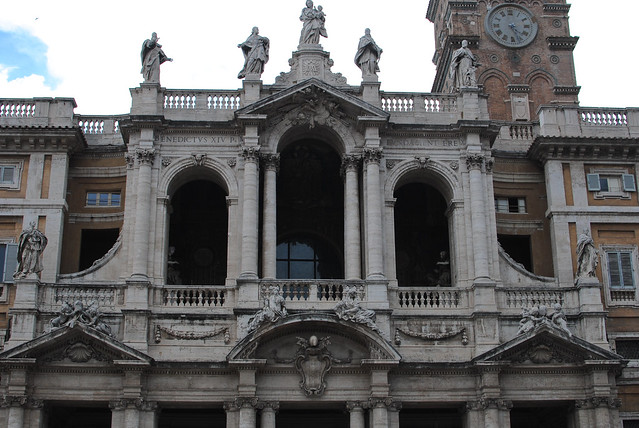 We went in and looked around a bit, but I have better interior photos from later in the trip, so I’ll share those when the time comes.

At this point, what had been kind of gray, cheerless skies turned into black clouds and raging wind. A big rainstorm seemed poised to arrive any second, so while we kept walking in the general direction of the Piazza Venezia / Trajan’s Forum area, we found a little restaurant to duck into and get some refuge from the storm.

My very first taste of Italian food made in Italy was this caprese salad. Simple and perfect (although CW was wiser than I and opted to skip the pitted black olives — no olives will ever be as good as the Greek olives and that is final). 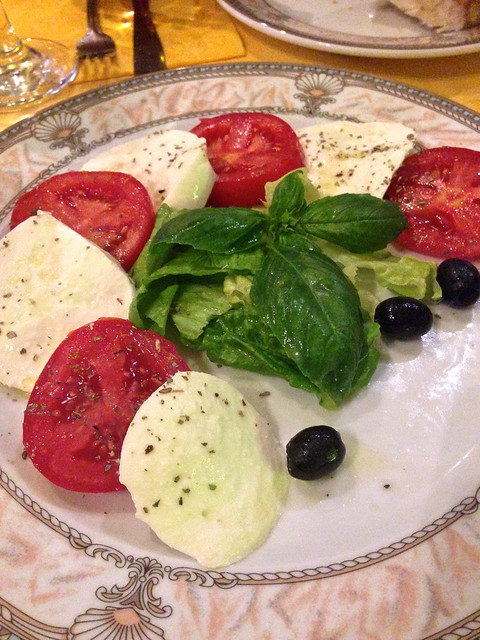 We lingered over salads and wine while the downpour outside died down to a light drizzle and we could be on our way.

Let me assure you, rain slows down virtually nothing in Rome. The tourist-focused part of town we were walking into was still just as packed as it would be on any day in the summer. Rain also does not stop Italians from being incredibly dapper and fabulous. Observe this man: 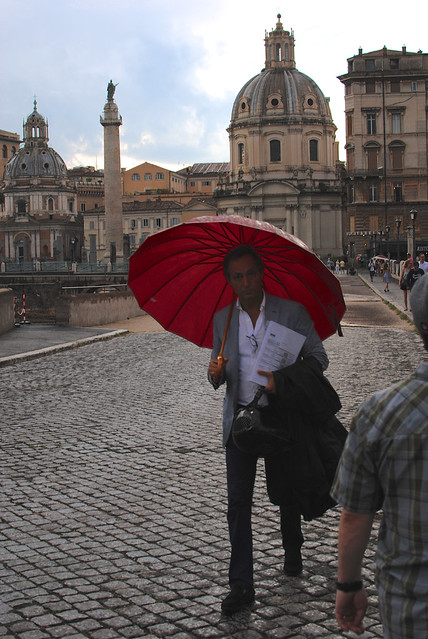 [Oh, how I wish I had snapped that photo a second earlier, before someone had walked into the frame. I just wasn’t quick enough!]

We didn’t let the weather stop us from walking all around and taking in the sights, trying to get an idea of where some of the main sites were and how far they were from our hotel. We were able to walk to this area in about 20-30 minutes from the hotel, where we could see Trajan’s Forum, the Altar of the Fatherland, another huge church, and — around the corner — the Colosseum. 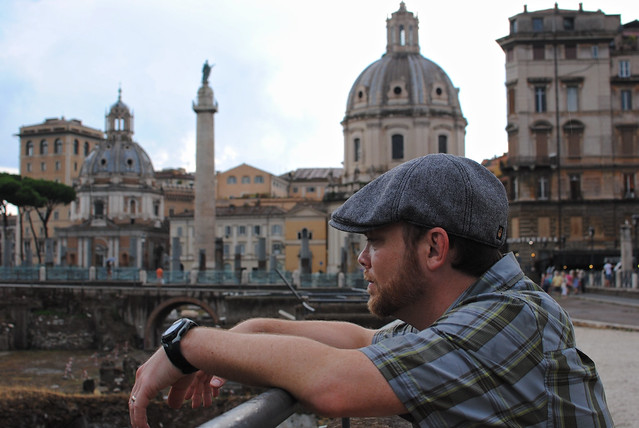 Like Athens, Rome seemed to be filled with all kinds of interesting ancient ruins in among the bustle of modern life. Everywhere we looked, there were ancient structures, modern structures, and everything in between, all piled up together in the city’s close quarters — somewhat suggested by this photo (one of many I took trying to illustrate this convergence-of-time phenomenon): 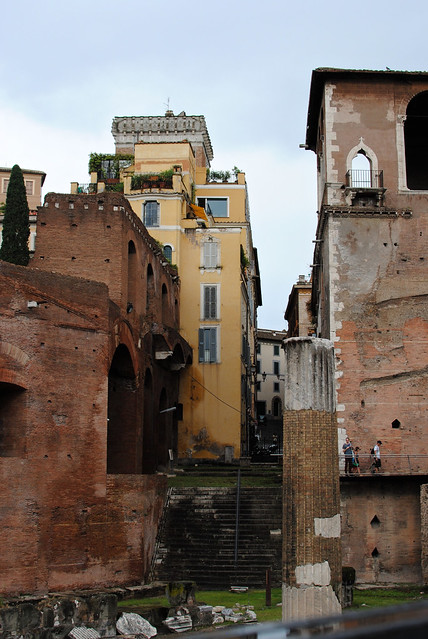 From here we started working our way in the direction of the Trevi Fountain, figuring it would be something fun and simple to see on our first evening in Rome. The walk there was full of more beautiful and interesting buildings, busy streets, populated squares, and many, many Guys Selling Stuff. Today, they were selling umbrellas. Throughout our time in Rome we would see them selling a lot more (ice-cold water, sun hats, tour tickets, toys…). 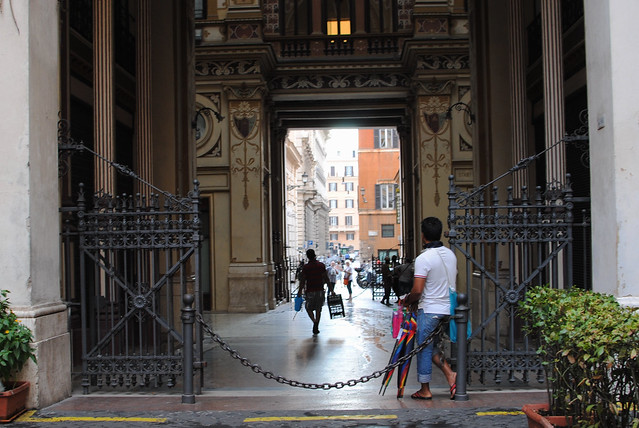 The Trevi Fountain, as it turns out, is under repair and has been drained. Hmm. 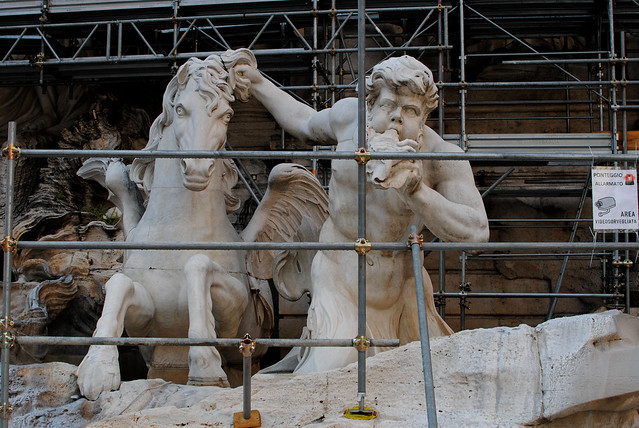 The city has set up a walkway bordered by glass so that tourists can walk across the area where the (empty)  basin is, actually allowing us to get closer to the statues in the center than one normally would. There’s also a little substitute basin set up outside the walkway  for would-be coin-tossers, so no one has to miss out on the experience of making a wish at the Trevi Fountain. Did we throw in coins and make a wish? Of course. 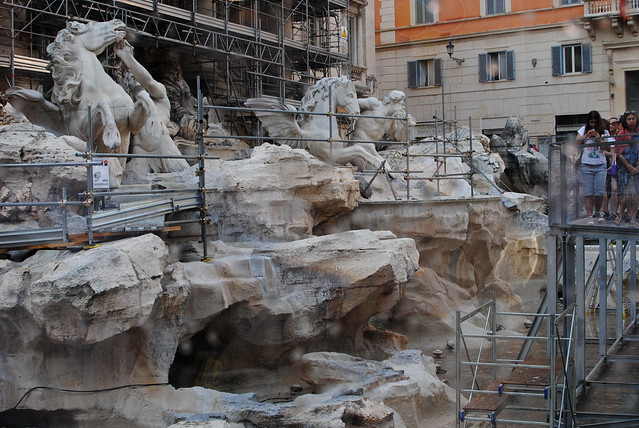 Our next mission at the end of this long day was to find dinner. We just sort of walked randomly around the fountain area, working our way out a bit to get farther away from the tourist-oriented restaurants directly on the piazza. (I am not one to be overly concerned about avoiding restaurants that are aimed at tourists, but we did find that those places charge more money and seem to have less interesting food, so it’s worth it to try some places that are a little bit off those main areas.)

CW noticed this little restaurant, Da Olimpio, down an otherwise dark alley and that description… doesn’t sound promising, I guess, but it turned out to be lovely. Please allow my photo of their adorable house wine carafe to serve as all the info you need should you ever be in Rome and want to eat there: 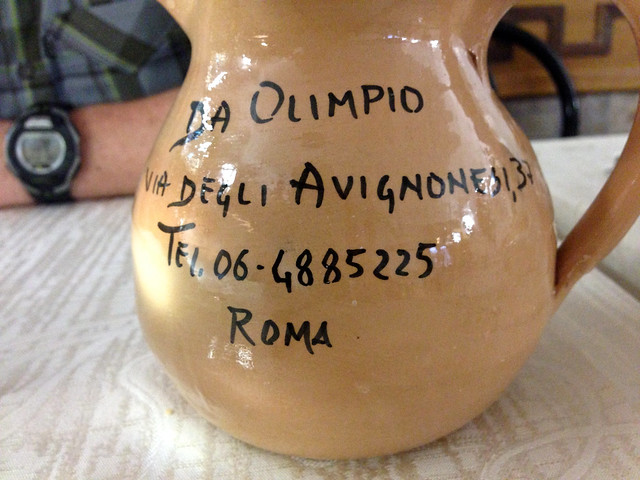 It was a cute, rustic sort of place staffed by a lot of older men (career waiters, I suppose), who didn’t speak much English. We managed to communicate just fine, of course — they’re professionals and are well experienced in helping non-Italian-speaking tourists, whether we all speak the same language or not. Plus, I had been practicing “vino rosso della casa,” the most important part of any order.  The vegetable sides and wine bottles were all on display in cases near the door (something we noticed in a lot of places) and the food was simple and well prepared. Good stuff.

We took our time with dinner and with the walk home. We were enjoying being in Rome, but we also talked about the adjustment it was taking to be there — the pace and energy were so different after five days in Greece. Rome just feels like a much bigger city than Athens. It is. The sidewalks and traffic are busier, the energy is faster, the attitude is less laid back and less friendly than in Greece, in my perception.

On another note, here are two funny things from our Roman hotel: 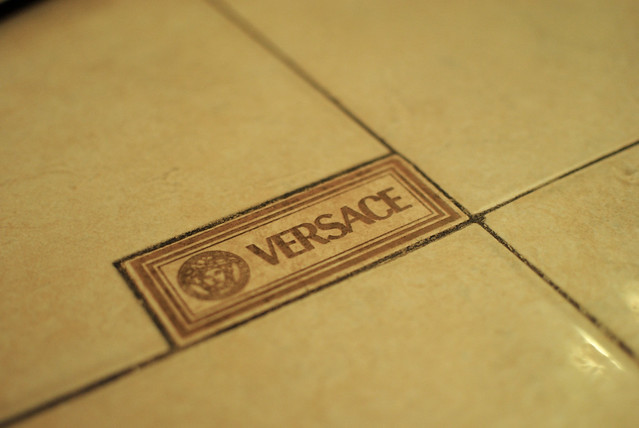 1) Apparently, Versace had something to do with our tile floor? 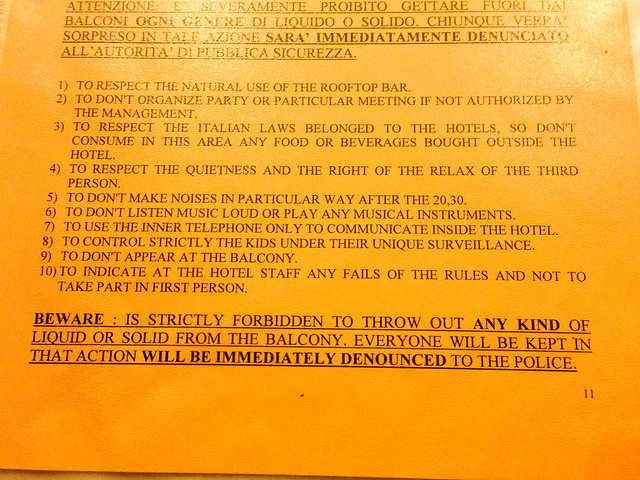 2) The above is taken from our binder of hotel information. Any breaking of the hotel rules, and you “WILL BE IMMEDIATELY DENOUNCED TO THE POLICE.” That is some serious business right there.

We had big plans for our second day in Rome, so stay tuned for that update shortly. (I may or may not be able to do daily updates for the next couple of days as my in-laws will be staying with us, so if I disappear, never fear; I will be back!)

You can see all of the photos from day one in Italy here, and if you need to catch up on any of the previous daily posts, you can follow these links for Greece, days one, two, three, four, and five.