We woke up on our first morning in Rome with some big plans to check out the ancient sites in the historical city center. But first, we had to go upstairs and check out our hotel’s rooftop breakfast buffet. After five days of the most amazing rooftop breakfast buffet OF ALL TIME EVER (at the Royal Olympic in Athens), we assumed that this breakfast would be underwhelming. It was perfectly fine, I thought, but maybe I was just drawn in by the croissants and Nutella. 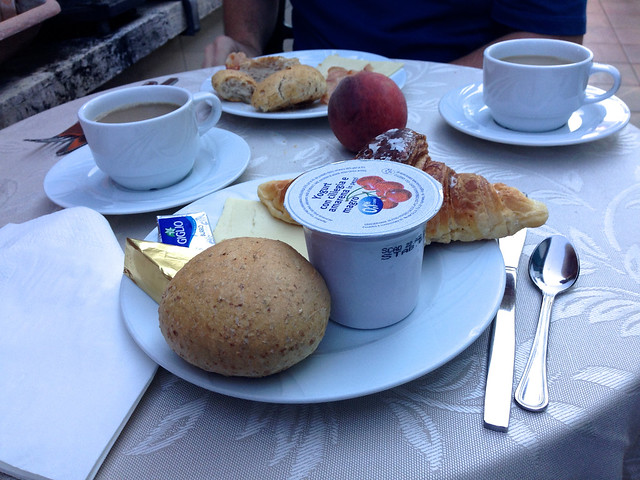 On our way to the Colosseum area, we stopped back into the Basilica of Santa Maria Maggiore for a few minutes and I managed to get a few decent photos of the interior. It’s a beautiful, quiet space. 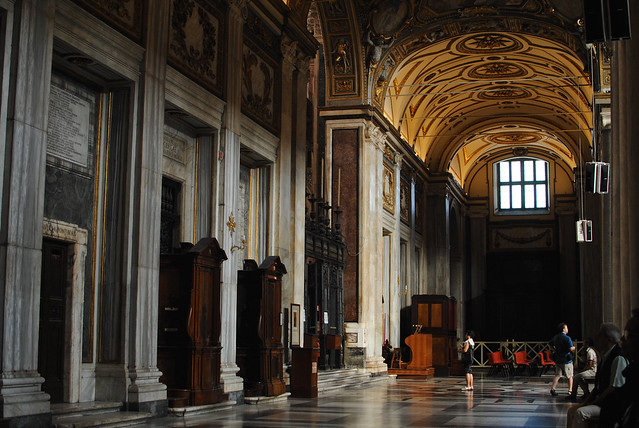 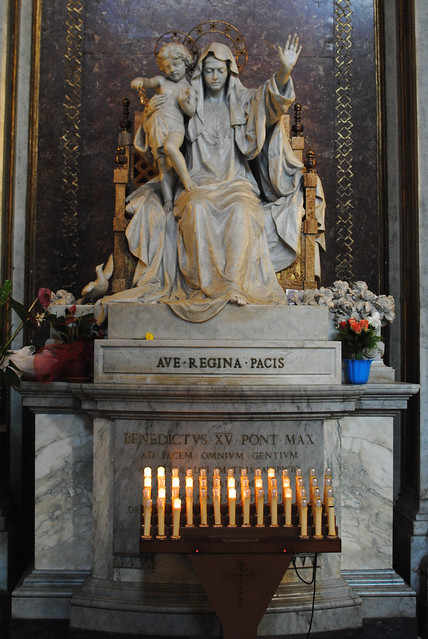 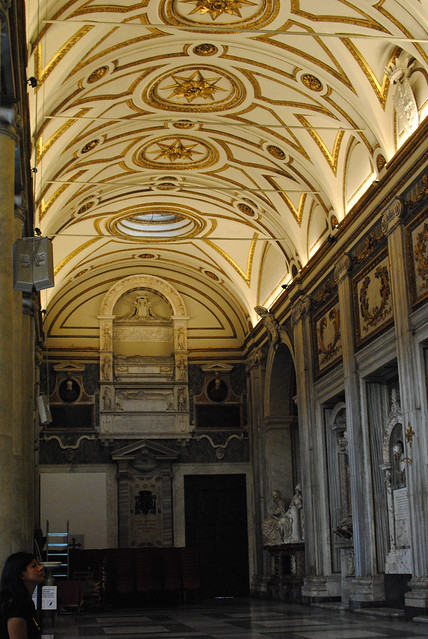 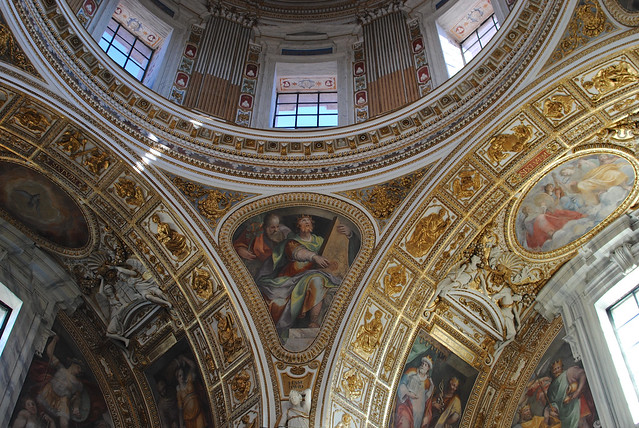 Don’t worry, I did not include the photo I took of the body of Saint Pope Pius V, who rests inside the basilica, but if you’d like to see it it’s here.  (I mean, do you come to my blog to see photographs of dead popes? Probably not.)

After some quiet time in the church, we were on our way to a totally different kind of space: 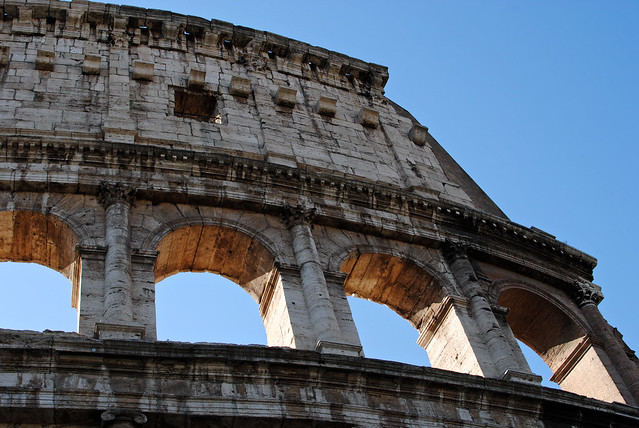 Oh yeah. The Colosseum. We got there pretty early in the morning (8:30?), but of course there was already quite the line to get tickets. It wasn’t too long a wait, though, before we were inside. Walking into the main space through an archway like this one was a very awesome moment — and I mean awesome in the sense of “awe.” 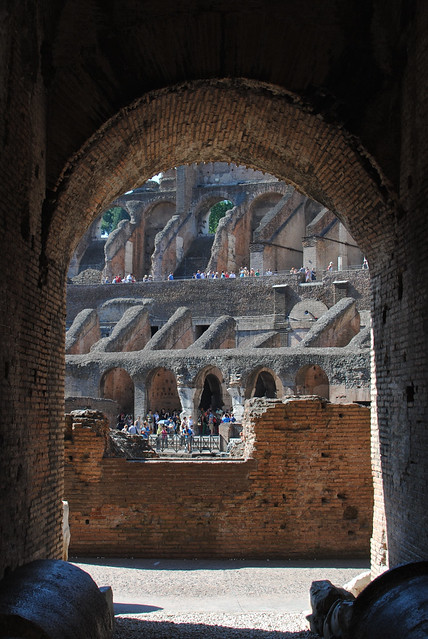 While the site was full of tourists like us, including plenty of tour groups and big families moving in bunches, it was never to difficult to move around in there. The space was designed to bring people together and allow them all to fit — its capacity was estimated at up to 80,000, which is around the same size as our football stadium. Wow. 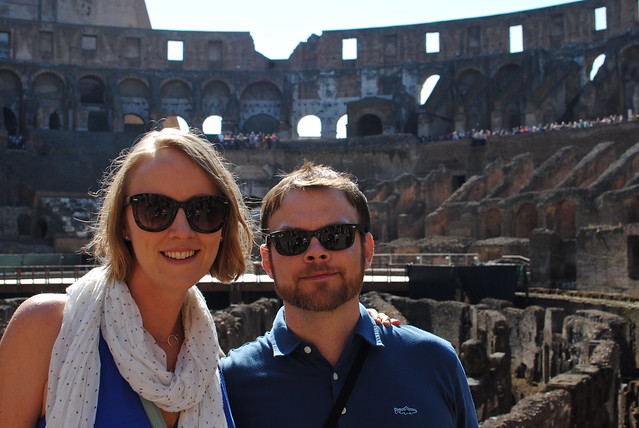 We explored multiple levels and walked all around to try to get a feel for its sheer size, but we weren’t allowed access into the lower levels, where the animals and gladiators were kept. It was interesting to imagine what that must have been like. 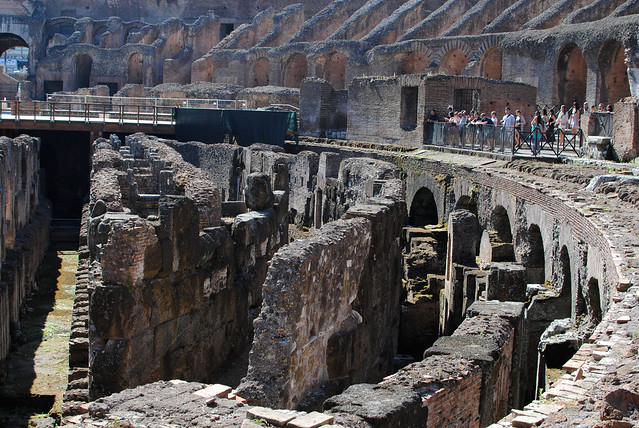 The Colosseum also has its own museum included, which had a very cool exhibit about ancient reading, writing, and libraries. HELLO! I saw tons of interesting things there, like this Ancient Greek set of library rules: 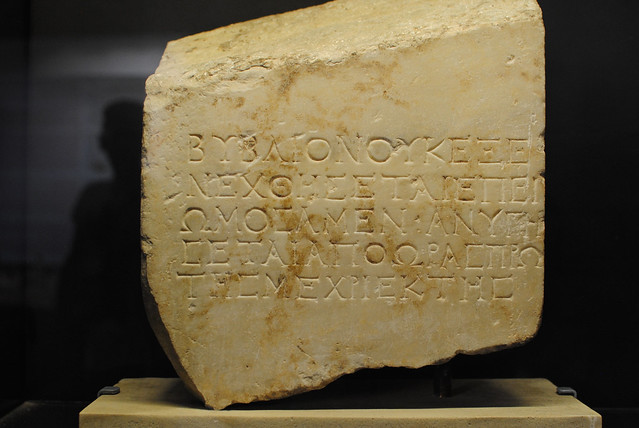 Once we’d fully explored the Colosseum, we wandered around outside a bit taking photos, looking around, and trying to avoid the dozens of in-your-face street peddlers trying to sell sun hats, ice-cold water, and bus tours. (We already had our Tourist Hats and bus tickets, but more on that later.)

Just around the corner from the Colosseum is the entrance to the Roman Forum — and our Colosseum ticket covered admission to both. Lucky us! The Forum was a really nice place to explore: 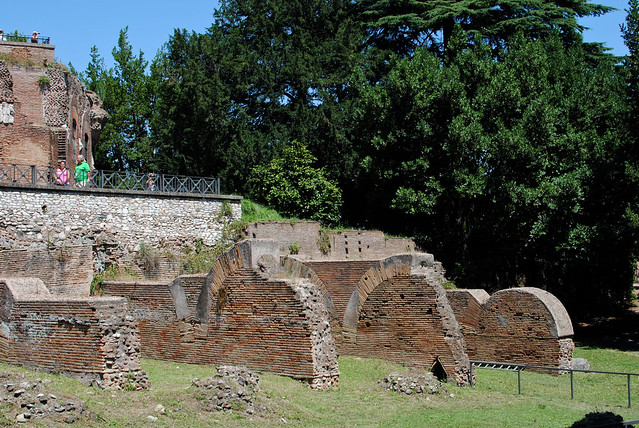 It’s much, much bigger than either of us expected, with something new and interesting around every turn. Whenever we thought a particular pathway was going to take us around back to the entrance/exit, we instead found ourselves heading in a new direction toward some other strange thing we had yet to investigate. 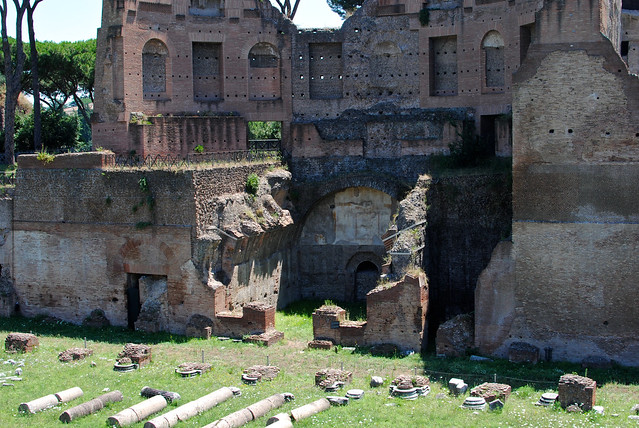 There were big, wide-open green spaces and wildflowers everywhere, in among the ruins of all kinds of structures. 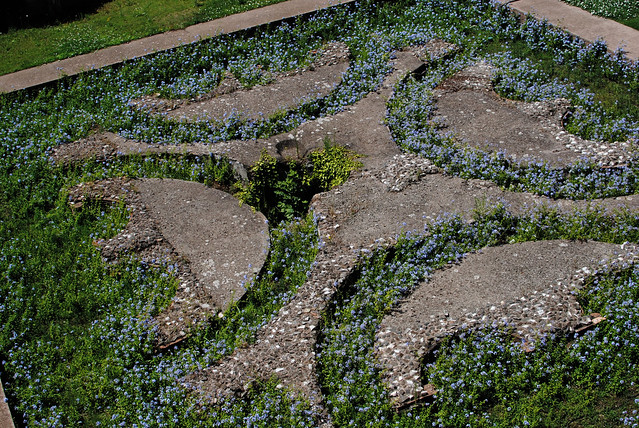 And at a few points, we were able to climb the steps of part of an old building and find ourselves up high enough to be treated to a stunning via of Rome’s rooftops under a cloudless sky. 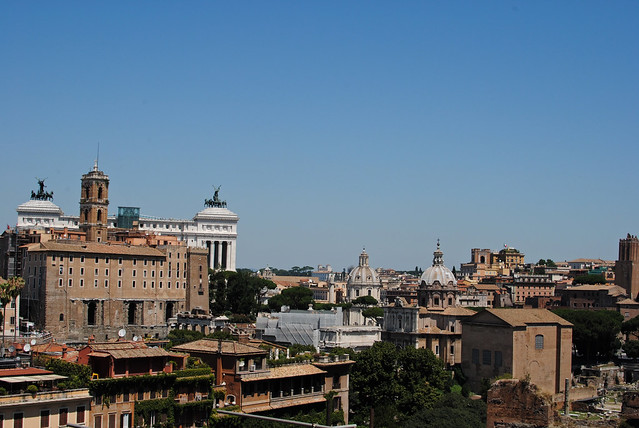 Now I am going to tell you a story about a hot afternoon:

By the time we had finished with the Forum, we had already been walking constantly for the entire morning and were ready to start heading toward somewhere where we could get lunch. We kind of took the long way round the Circo Massimo (old chariot racetrack, not a lot to see) and found a sidewalk café where we could get a pizza and some cold beers.

At this point in the day I was seriously starting to feel the heat and the sun. The air-conditioned inside of the restaurant felt amazing, but there wasn’t really anywhere to sit inside (unless we wanted to be crammed shoulder-to-shoulder between two other couples, which CW later said he wouldn’t have minded, but), so we sat outside. Even the shade from the umbrella did little to relieve the incredible heat. It felt like it was about a hundred and fifty degrees out there. The only thing that kept me from dying was a really big, really cold Peroni. Mille grazie, Peroni.

While eating, we noticed we were directly across the street from one of the stops for our Red Tourist Bus — we had bought tickets for the same hop-on-hop-off tour we’d used in Athens, and this would be our first try at hopping on in Rome. An air-conditioned ride around town (possibly stopping somewhere for further amusement) seemed like a good post-lunch activity. We had to rush to pay our bill and run across the street to catch the bus, but we made it. There were no seats in the air-conditioned lower level, but the open-air upper level had an awning and a cool breeze, so we settled in happily for the ride. About two minutes into the ride, CW realized he’d left his camera at the café. Oh hell no.

The busses aren’t supposed to let people off between official stops, but we begged and they obliged, letting us go about 5-6 blocks from the café. By the time we got back, no one had yet been seated at our old table and CW’s camera was still safely tucked underneath. WHEW. I am telling you, it would have been completely MISERABLE to have lost his camera — not so much because of the camera itself, but because of the photos that would have disappeared along with it.

Well, all we had to do was cross the street again and catch the next Red Tourist Bus. No problem. Except for one thing. The next bus that came around had no awning on the roof level and no air conditioning on the lower level — so we could choose to roast in the sun or steam in the sauna down below. We opted for the latter and hoped that once the bus got moving, the windows would let some air in, but our hopes were in vain. I am telling you, I have never felt so hot and disgusting and murderous in my entire life. All I could do was wilt limply into the hot plastic seat, fanning myself with the stupid Red Tourist Bus Map (“air-conditioned busses” MY FOOT) and praying for death or lemonade.

It was the longest bus ride of my life. We were stuck in the back of the lower level, with no air, and we couldn’t even see anything out of the stupid windows. Damn youuuuu, Red Tourist Bus.

We finally made our escape when the bus stopped near our hotel and I made a beeline for the nearest mini market, where I saved my own life with the purchase of an ice-cold can of Fanta Limonata, declaring it to be the most refreshing drink of all time. I drank it while lying in bed in my underpants, so, you know, that’s just how I do my glamorous Italian vacations.

This concludes my story about a hot afternoon.

After our glorious siesta, CW and I ventured back out in the cooler night air to look for dinner. It was supposed to be my job to choose the neighborhood/place, so I just started heading us in the general direction of the Spanish Steps, thinking we could stop somewhere halfway there (around Piazza Barberini) and find a restaurant, then check out the steps after dinner. My dining companion did not like the look of any of the places we passed on the way, and when we made it all the way to the Spanish Steps without having seen a place to eat, my dining companion then got grumpy that we had walked that far and  ended up at a tourist spot where there would be no non-touristy restaurants. (Sometimes, when it is my turn to pick something, I still find myself inexplicably thwarted in my pick.) So we then had to turn around and walk back in the other direction to try again. No one was happy.

Eventually we did eat dinner (nothing to write home about) and I think the food and the wine revived us enough to move on with the evening. We even would up walking BACK to the Spanish Steps to hang out with the crowds there. It is apparently the place to go sit and talk and — if you’re, like, 16 — to make out with your boyfriend/girlfriend in public. 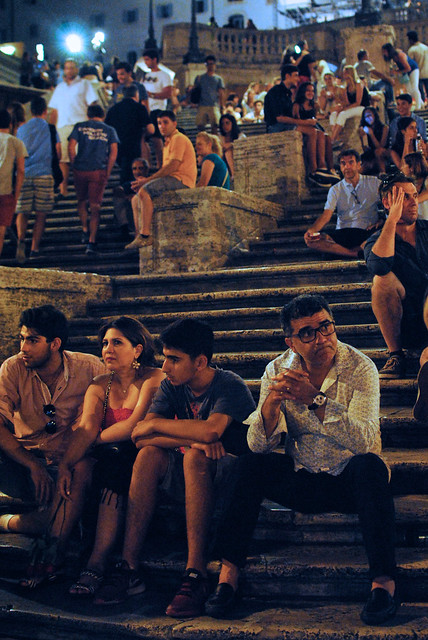 (That man seems to disapprove.)

The Guys Selling Stuff were there in full force, selling flowers, canned beers, and laser pointers (I… don’t know). 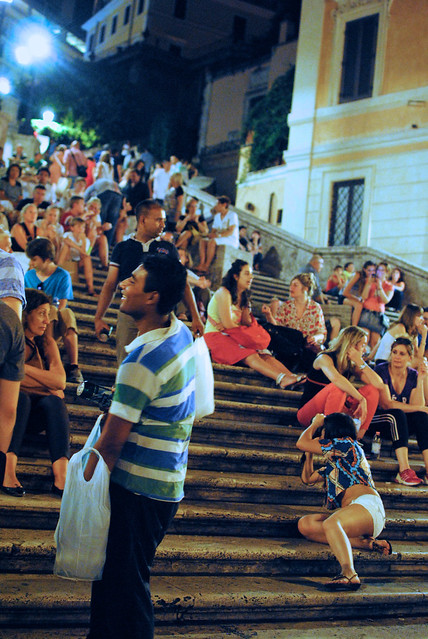 On our walk back to the hotel, we passed some beautiful truffle shop called [Something Something] Tartufi, which was like a magical mirage. Their window displays were incredible — a single truffle or macaron displayed and packaged with the same level of style and elegance as if it were a $500 bottle of perfume. It was like a mirage, I say, because I always intended to go back there during business hours, but I never did. *sob* I didn’t even photograph it. Does it even exist?!

It turned out that all our walking — through the levels of the Colosseum, all around the Forum, the long way to lunch, back to get the camera, and then ALL around during the Neverending Quest For Dinner — amounted to the highest step count I have ever recorded on my FitBit: 30,060. WHOA.

I probably won’t get another recap up until Monday, so I’ll check back in then with tales of Our Day at the Vatican and the Surprise that Happened There. (Oooh.)

If you haven’t had your fill of Colosseum photos, there are about a million more in with the rest of the photos from day two in Italy, here. And if you need to catch up on any of the previous daily posts, day one in Italy is here and you can follow these links for Greece, days one, two, three, four, and five.