Our last day in Rome was upon us. The following morning, we’d be catching a flight back to Atlanta, so we had just this one day left to make the most of the city. CW and I each had one thing we wanted to do, so that was how we structured the day — we would spend the morning visiting the Catacombs of San Callisto (CW’s thing), then shop and have lunch at/near the market at Campo de’ Fiori (my thing). The only problem with this otherwise great plan was that the catacombs were about three miles southeast of our hotel and the market was about 2 miles in the opposite direction and it was raining all morning AND my beloved Birkenstocks, which I had worn almost every single day of the trip, walking ~10 miles a day, had finally given me a huge blister on the ball of my foot. So all that walking, well. It did not seem like a great idea.

I had made it to day ten without using much of my international roaming data plan, so I figured I’d just turn on data for the day and use Google maps public transit option to get us around town by metro and bus. It worked beautifully and I would like to welcome our Google robot overlords.

So, we got an all-day public transit pass (6 Euros per person and we were allowed to use the metro, the bus, and the tram/light rail — good bargain). We fairly easily caught the metro  bussed it over to the catacombs, staying out of the rain under the bus shelter while waiting for the bus that only runs every 40 minutes. It wasn’t exactly a fast trip, thanks to the wait, but it worked.

The Catacombs are located a few miles down the ancient Appian Way (remember learning about that in your history classes?), which, well, it is an ancient road. It’s narrow and cobblestoned and walled in on both sides, making it a bit of an adventure, particularly in the pouring rain. The rough yet slick-with-rain cobblestones shake and rattle the bus as it screams around the turns, inches from the high stone wall. And then the bus dumps you out on the side of the street — the street that is so narrow it barely seems able to accommodate two lanes of traffic, let alone pedestrians walking to and from bus stops. You basically have to press yourself up against the wall, squeezing your body away from passing cars, and pray for the best. As you walk down the road in this manner, you can’t really see where your destination might be — the high wall hides everything from view. Eventually you come to a hole in the wall that leads up the long driveway to the catacombs, where once again there are wide open spaces and quiet. Whew. 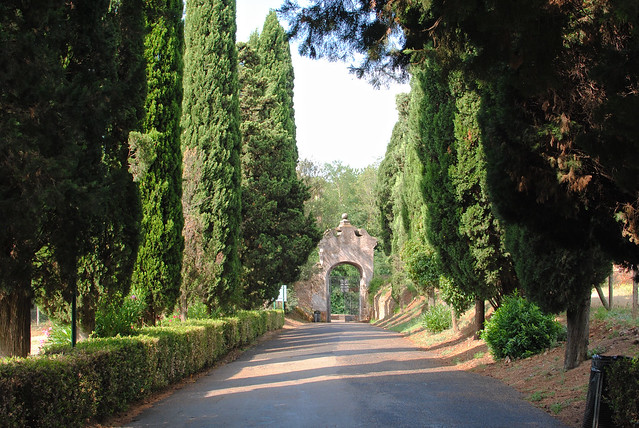 We took a tour of the catacombs, in which I think some 500,000 people are buried — Catholic victims of Nero’s persecution. The tour was fairly interesting, but we were only allowed in one main level, where all of the niches had been opened and the remains removed. The deeper levels, where bodies still rest, are not open to visitors. No photos were allowed, so you’ll just have to imagine an underground cave with empty tombs. A little eerie, to be sure.

After the tour, our public transit adventure resumed. Google maps was a little iffy this time around when it came to catching the #118 bus back toward the center of town. It came by at the time the app indicated, but going in the wrong direction, or something. I forget the exact issue, but eventually it came down to a choice: stand out on the side of the Appian Effing Way (as we came to call it), waiting for the bus for 20 minutes in the rain, or get on it right away, going in the wrong direction, and ride around the loop route for 20 extra minutes while staying dry. We opted for the longer bus ride because neither of us was particularly confident about standing on the side of the road, up against that wall, while hoping desperately not to be squashed like a grape by a speeding Roman truck. 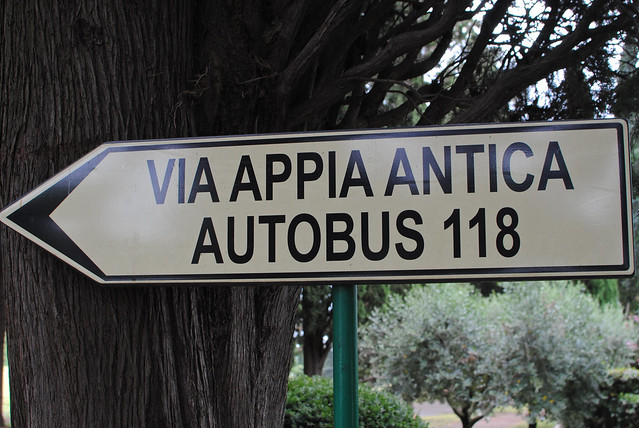 I will note that the Appian Way is apparently closed to motor vehicles on Sundays, when it is available for people to walk, run, or bike. I think it would be quite lovely to see on a Sunday, but this was a Monday and hence, the potential to be squashed like a grape was very real. 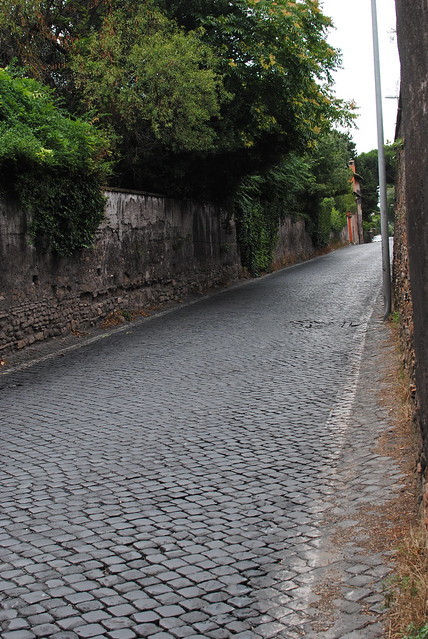 (This is meant to accommodate traffic going in both directions, and that “shoulder” has got to be less than one foot wide.)

At any rate, we caught the bus and made our way across town to Campo de’ Fiori, the famous market. I don’t know; I just love markets. I had fun looking at all the different kinds of produce that were sold — some new or unknown to me, some just being sold in a slightly different way, like these zucchini with the flower still attached. (Our lunch in Florence the previous day had featured stuffed squash flowers and oh, they were SO GOOD.) Please note the many, many varieties of sun-dried tomatoes. The italians do not joke around. 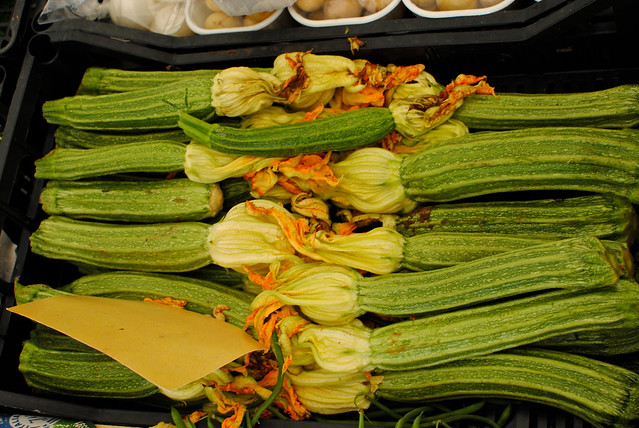 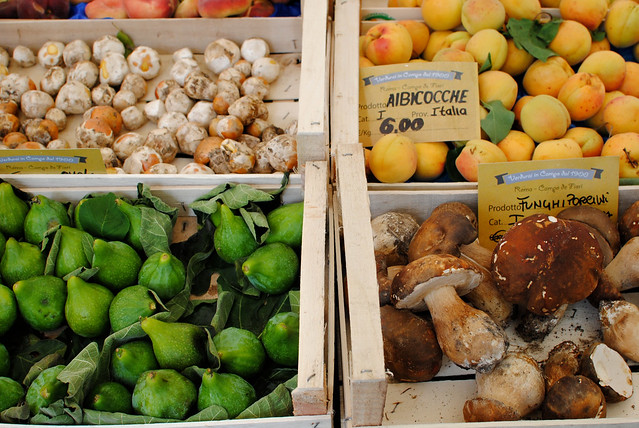 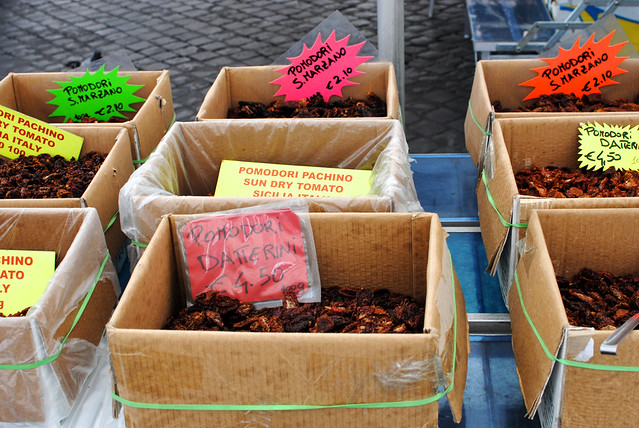 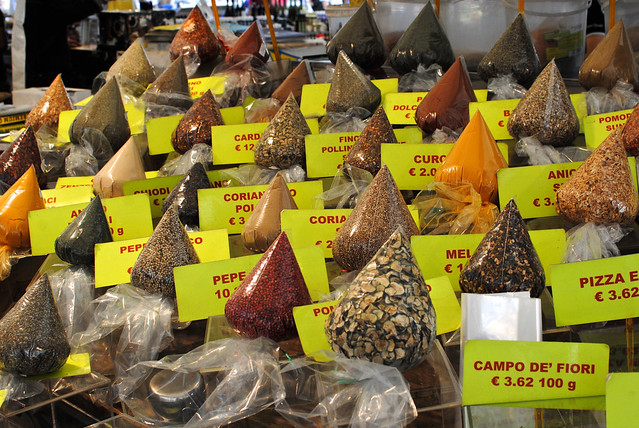 We enjoyed a big Peroni and a snack at a nearby café and did some people-watching, and finally decided on buying a small bottle of olive oil and some interesting honeys to take home. We did not mention these items to customs. I think honey, as an animal byproduct, is supposed to be declared (?), but we kind of forgot about it. I’m…sure it’s fine.

Having accomplished our two remaining Rome goals, we had the rest of the day to wander a bit and do whatever we wanted. This sounds lovely, but at the time I think we both felt a bit purposeless. Rome has so much, a person can certainly wander aimlessly and happen upon wonderful things, However, there are times when having a specific objective would really help, and this was one of those times. We were both pretty tired and neither of us felt like making a decision about anything. We wound up wandering through the Piazza Navona, which seems sort of like a Roman fountain theme park, almost, and taking some photos there. 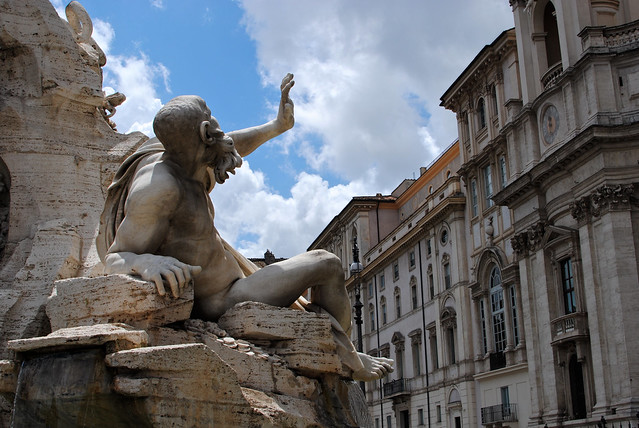 The weather was clearing up and the sky was doing a very pretty fluffy white cloud thing.

We then found ourselves near the Pantheon and having a very overpriced pizza for lunch, paying, I suppose, for the view of the Pantheon more than for the food. It was at least our second time finding ourselves there, so we finally decided to go inside. 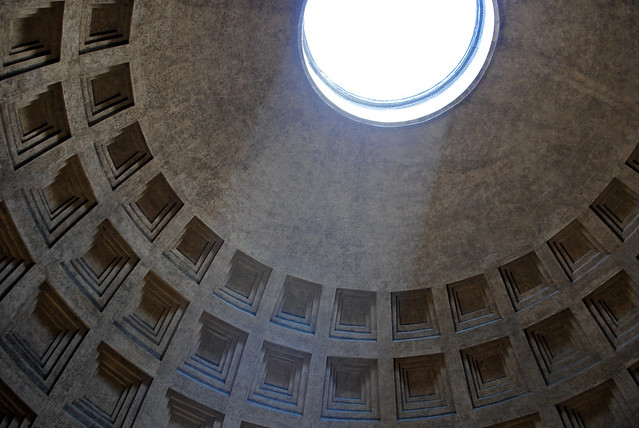 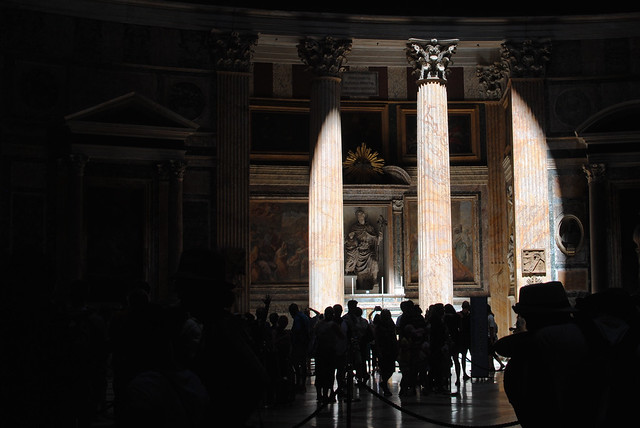 At this point, I was more interested in the beam of light coming in through the top of the dome than I was in learning about any historical or cultural significance, so I can’t tell you much about the Pantheon. Forgive me. Please enjoy this beam of light.

Our route back in the general direction of our hotel took us past the Altar of the Fatherland, this hugely ostentatious white marble building we had passed by so many times already while in Rome. Today, we decided to stop for a closer look. The day had turned out to be so beautiful — fluffy clouds racing across the sky, the hot sun being mitigated by all the wind in our hair. It turned out to be a lovely afternoon to photograph one of Rome’s most photographable spots. 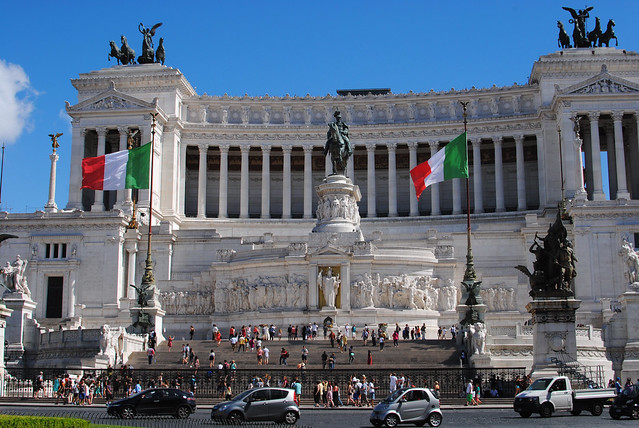 The building is even bigger than it looks in photos, the steps going up higher and higher to the museum entrance, and it’s lovely to stop every now and again to see what you can see from each new vantage point as you continue to climb. 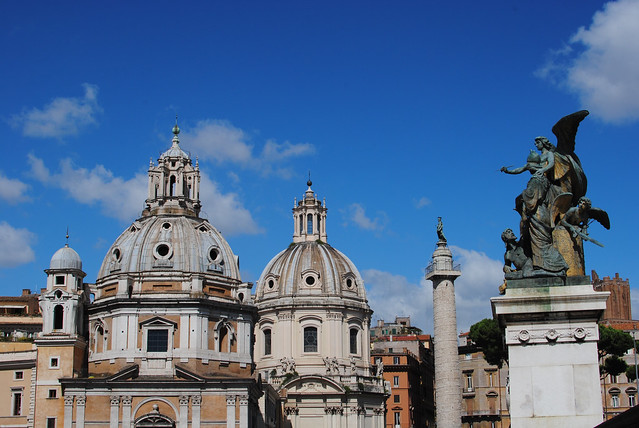 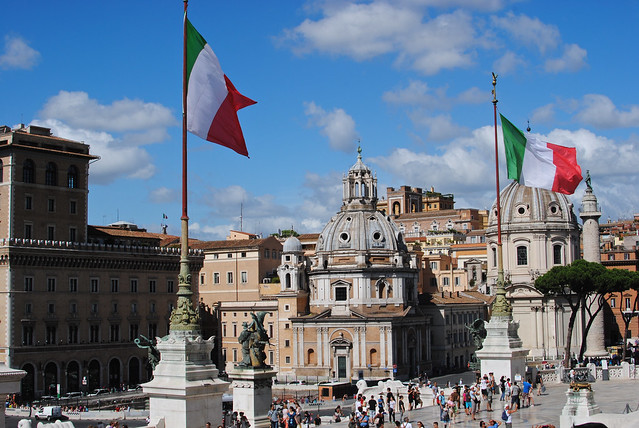 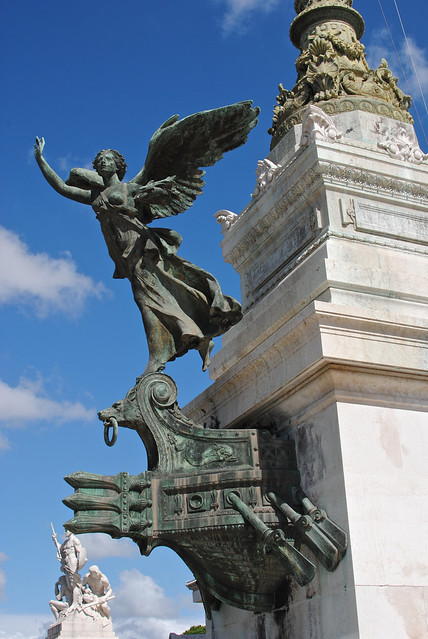 I was less interested in the building itself (it’s not my taste at all) than I was in the views it afforded. 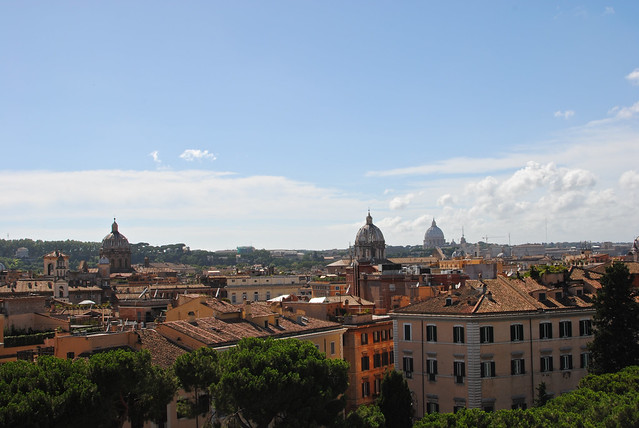 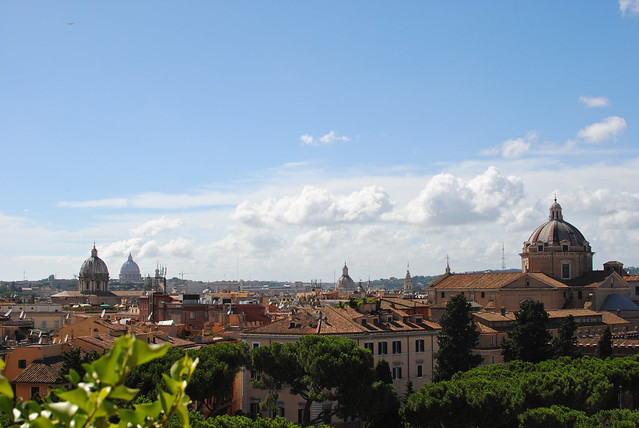 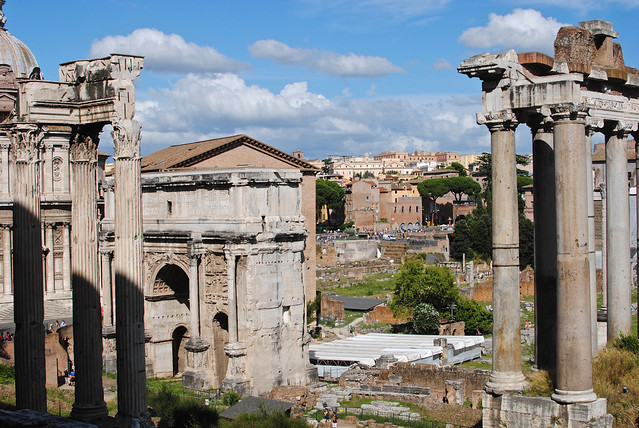 I was glad we had such a beautiful afternoon to enjoy the last sights we’d see in Rome, and such a great view of the city. After we had our fill there, we meandered our way back to the hotel down some narrow little side streets and made a couple of stops on the way to fulfill my last two wishes for Rome: one more gelato, and one more bottle of prosecco.

We stopped for gelato at a little corner place with a couple of tables outside, but wound up sitting on some steps instead as the tables were taken by a group of 6-8 other American tourists who happened to be comparing their Fitbit stats for the day. (I always have sort of mixed feelings about running into other American tourists when out and about — of course, part of me likes to imagine that I am super special and therefore won’t run into anyone else like myself, but I also am aware enough and realistic enough to realize that I am, in fact, not that special at all. Anyway.)

On this occasion, I finally landed upon the perfect flavor combination: half bianco de something* and half delizie al limone, or basically half ricotta pistachio, half lemon with pastry bits. It was delightful. We grabbed a bottle of prosecco from a mini-market and hoofed it back to the hotel for a little siesta and refreshment and lounging until we were ready for dinner.

[*It had this lovely sounding name and now I’ve forgotten it and my journal says it was “bianco de [smudge]” and now I am bereft. Maybe it will come to me.]

Our last meal in Rome was at a little place near our hotel — nothing too trendy or near any of the big attractions, just a quiet place staffed with mostly older guys who were exactly attentive enough without being too present. I had a butter sage ravioli and CW had some kind of exciting looking seafood spaghetti with loads of interesting shellfish. When it came time for dessert, we looked at the pastry case and pondered, finally deferring to our waiter’s recommendation. He brought us a plate with three different pastries on it for us to split. By the time we were finished I was so full I was afraid CW would have to roll me back to the hotel.

We took our time heading back, and stopped one last time at the Basilica di Santa Maria Maggiore to sit at the fountain and soak up a little more of Rome before it was time to head back. 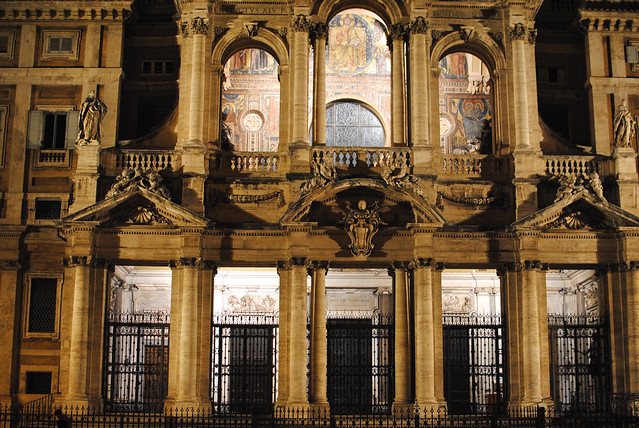 I’ll probably write one final wrap-up post with some reflections and other tidbits, but otherwise the travel recaps are over! Whew. The entire collection of photos is available on flickr. And if you would like to catch up on any of the previous daily posts, you can check out Italy’s day one, two, three, and four, or follow these links for Greece, days one, two, three, four, and five.