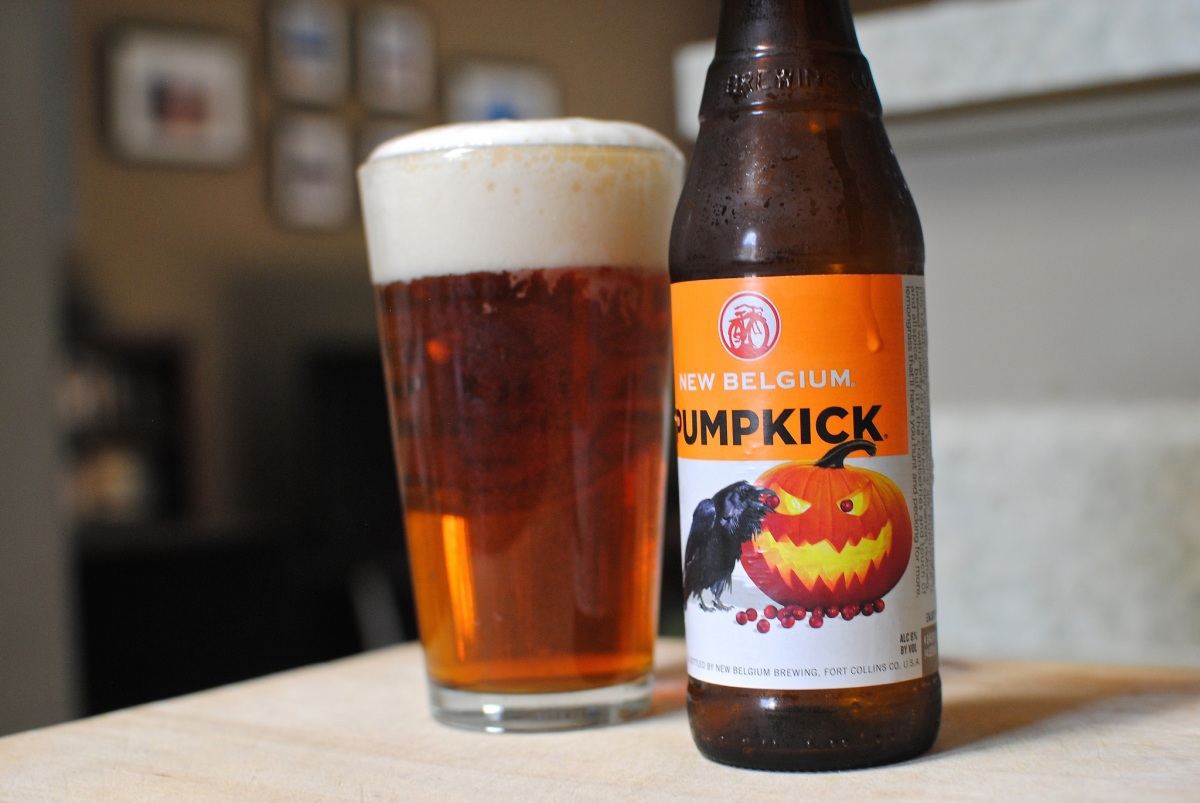 I keep seeing comments all around that the annual fall pumpkin craze has gone too far. I, for one, am not complaining. What this craze means for me, in practical terms, is that this year there has been a much better variety of pumpkin beers available in my small town. Last year, I remember really wanting to try a bunch of interesting pumpkin beers, but all we had were versions by Sam Adams, Blue Moon, and Shock Top. Those are all fine, I suppose, but nothing worth getting excited about, and (after trying a few much, much better versions this year) they’re nothing I will buy again.

So, for those of you who aren’t card-carrying members of the anti-pumpkin beer league, here are the ones I tried this fall and how I rank them according to my personal preferences.

For the record (if you’re wondering if your beer preferences align with mine), I generally like all sorts of fruity beers (peach, cherry, watermelon, citrus…) and I hardly ever will drink an IPA, no matter how trendy they may be. They’re simply too bitter for me. My other fall favorites are brown ales. And I will drink a German hefeweizen any time of the year. For pumpkin beers, I like them with a lot of pumpkin-pie aroma, spices, and a bit of sweetness. 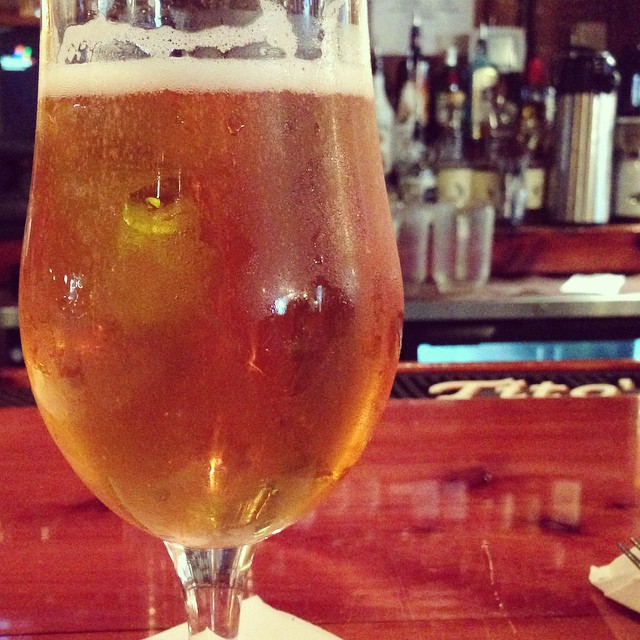 This has been my absolute favorite of all the pumpkin beers I’ve had this fall. It’s been available on draft at a couple of places here in town, though I think it’s gone now. When I first had it, it was $9 for a 12 oz glass. Needless to say, I did not realize the price until after I’d had some, because damn, I don’t think I would have ordered a $9 beer. Luckily, we found it around the corner for a much less insane $4.50 per pint. If only I’d been able to find this beer for sale bottled, I feel as if my life this fall would’ve been complete. As it was, I think I got to drink 3-4 servings of it all together. It has amazing pumpkin-pie spice aroma, with a little hint of vanilla as well, and the flavor to match. It is most definitely reminiscent of pumpkin pie, while still tasting like beer. I have honestly never tasted a pumpkin beer I liked better. Love it. Oh, also. It’s 8.6% ABV, so be warned! 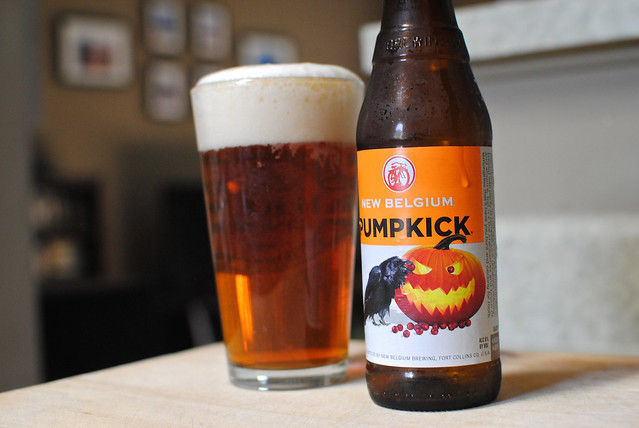 I really, really enjoyed this one, Sadly, like the Pumking above, it was destined to be drunk only a handful of times this fall, as it disappeared from the stores really, really fast. I think it was quite a limited production. I hope they bring it back next fall. The beer is brewed with pumpkin juice (as opposed to just pie spices) and a bit of cranberry, which I think is a fabulous and unexpected pairing. It just really works.  (6.0% ABV) 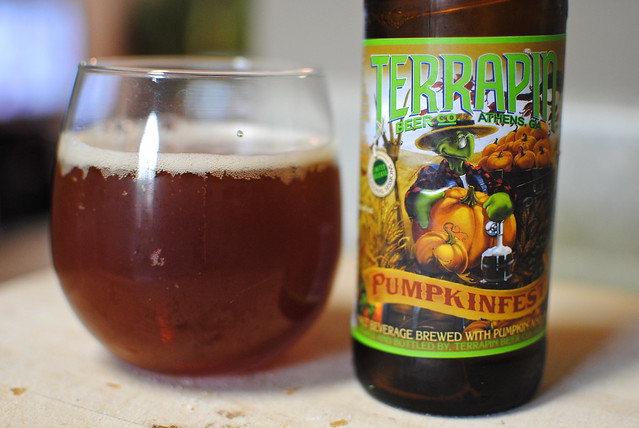 This was one I picked up at the grocery store when I went in hoping to find either of the two listed above. The Southern Tier was never to be found in any of my local stores and the New Belgium had already sold out, so I decided to try the Terrapin version. Very glad I did! While this is also a specialty beer with a specialty price (a four pack was over $10), I think it’s worth it to have in the fridge for special occasions. I wound up savoring my four pack for quite a while. It has a great pie-spice aroma, which is something I really appreciate in these beers, and is satisfyingly full bodied. For what it’s worth, I believe this is the only lager among these (the rest are ales).  (6.1%ABV) 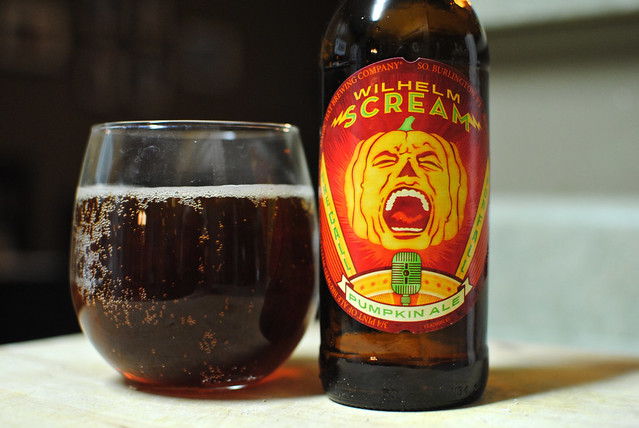 I only tried this one for the first time last night — I realized as I was shopping for some other groceries that this was the last pumpkin beer I’d been intending to try this fall and it might be gone soon, so if I didn’t want to miss my chance, I’d better grab some. I poured myself a beer while I was making dinner (pizza with Field Roast and various leftover veggies) and enjoyed it. It does have a bit of the pumpkin-pie-spice aroma with a little nutmeg, but in terms of flavor, there isn’t much actual pumpkin or pie spice to be detected. Slightly sweet, not super full bodied. It’s a good, easy-drinking beer, but the pumpkin/pumpkin pie flavor doesn’t come through as much as I’d like. I still have five left in the fridge though (and my husband refuses to drink pumpkin beer), so I’ll be giving it a few more chances. (5.4% ABV)