Are any of you claustrophobic or afraid of elevators? Consider this a trigger warning.

The night before last, my husband came home late after having a long meeting with one of his students. He told me they’d been sitting in his office working through a big project together when all of a sudden there was a commotion in the otherwise quiet hall. It’s normally dead in our office hallways after 5:00, so this was pretty unusual.

The commotion turned out to be a grad student who had just been finally freed after being stuck on the elevator for quite a while — she was panicking a little bit, and some other faculty were there kind of helping her recover. It’s not totally unusual for the elevators in our building to malfunction. There are four of them, and often only three are working. Everyone has a story of being stuck — at least for avery short time. So my husband tells me this story, then he also tells me that he thought the elevators had been acting a little weird lately, and then he says, “I’m just warning you. Take the stairs tomorrow!” 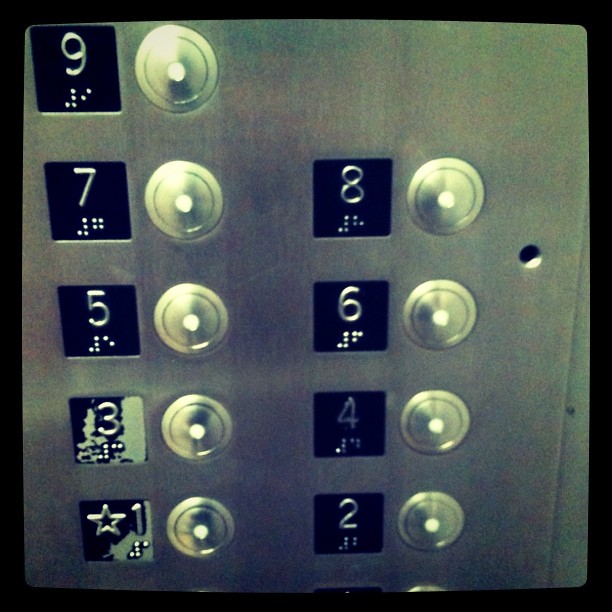 Did I remember this warning the next morning? Reader, I did not. I forgot a few things the next morning, in fact. I went to work and parked in my usual place in the parking deck, which is maybe a quarter mile (or more?) from my 9-story office building. I made it to the building and up to the 9th floor without incident, but then realized I’d left my coffee in the car. Normally, I might not go back for a cup of coffee, but yesterday morning that shit was necessary. There was no way I was going to make it through the morning’s classes without it. So back I went.

Down nine floors in the elevator, back to the parking deck, got the coffee, and walked back to my building, taking the elevator back up. That’s right; I’d taken the elevator three times now — that is how thoroughly I forgot the warning! And that third ride was when I got stuck. I was alone (which I appreciated; I don’t want other people panicking in there with me) and I just sort of calmly waited for a couple of minutes. I’ve been pseudo-stuck on the elevator plenty of times, when the door will usually open after maybe 30 seconds or so. Thirty seconds feels like a long time, but it really isn’t, so that sort of thing doesn’t generally faze me. And I did have coffee, after all. Yesterday, however, I waited about two minutes before finally using the “CALL FOR HELP” button and reporting my situation. I’m not sure if the person on the other end worked some kind of magic, or what, but in a few seconds, the door miraculously opened. Fine. I took the stairs the rest of the way up.

So, guess what happened today?I continued to be an idiot, is what.  I’m on the elevator again, on my way into the building first thing in the morning, this time with two other people from my department and yes, I got stuck AGAIN. This time we had to wait several minutes to be freed. We’d only made it to the second floor, and when the doors finally opened, I decided to walk up to the ninth. What did my colleagues do, I ask you? They STAYED IN THE ELEVATOR to ride the rest of the way up to the ninth floor.

I honestly couldn’t believe it. I mean, okay. I am dumb enough to take the elevator three times in half an hour the day after I was warned not to use it. Then I’m dumb enough to take it again the next day, after I’ve already been stuck once. But for the love of dog, there is NO WAY I am going to continue to ride up in the elevator on the SAME RIDE after I’ve just been stuck again. Nope. A thousand gallons of nope.

When the elevator gets stuck, the first thing that usually happens is that it will sort of jerk and then drop down about a foot. It’s enough to give you that stomach-drop feeling and make you want to brace yourself in case the car free-falls down to the basement. Which it never does, but still. It’s not a great feeling. I’m glad I don’t suffer from claustrophobia or a fear of elevators, because I would certainly have been traumatized afte the past two days. Honestly, though, I find stairwells to be much scarier, especially going down the stairs. That big, empty chasm just on the other side of the bannister? What’s to stop me from launching over? NO THANK YOU. I will white-knuckle the bannister all the way down. I suppose that’s why I’m willing to keep taking my chances with the elevator — just not on the same ride after I’ve already been stuck! I will wait at least 24 hours.

Anyway. I’ve got one more day of classes to teach and then the next week is final exams and then, so long as I am not trapped in an elevator in my office building, I will be officially on break for the holidays. I cannot wait. 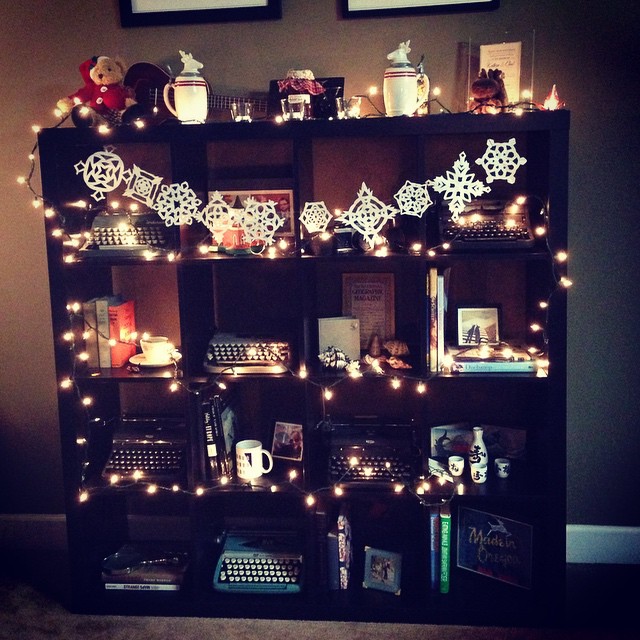 I have already started Christmassing up the joint — I’ve got my paper snowflake garlands and a string of white lights, a bunch of pine cones, and some festively scented candles. I’m hoping to go buy a tree this weekend, if I can tear CW away from his planned grading marathon. Cross your fingers for me.