A few weeks ago I really did not believe if make it this far, but here we all are. 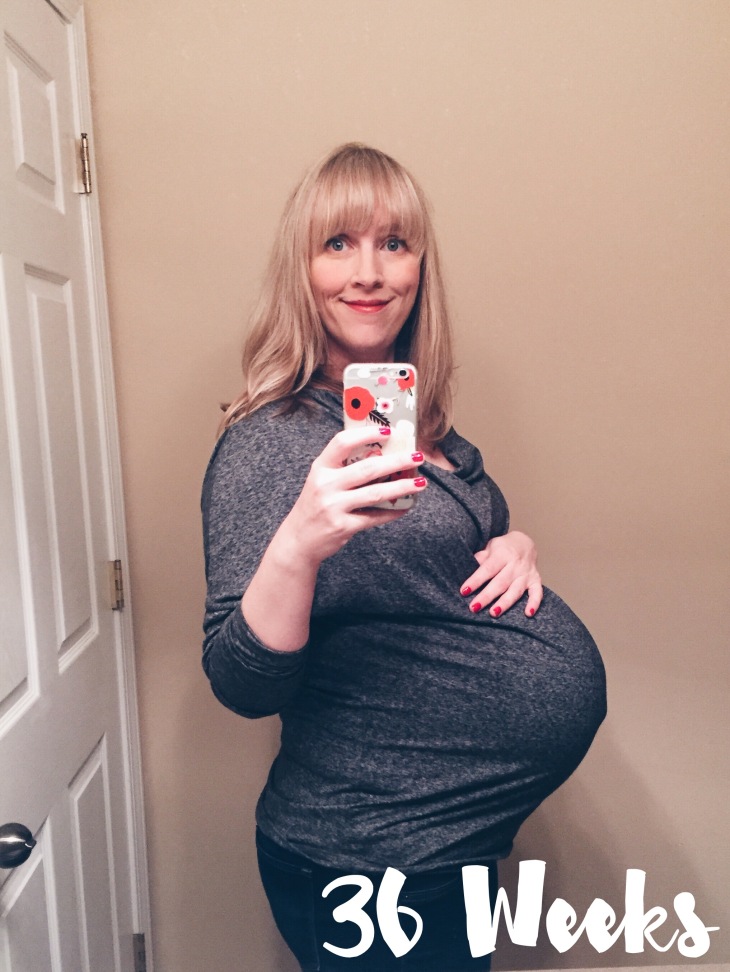 The Babies are the Size of: I forget what boring fruit or vegetable the comparison was this week, but the “fun and games” comparison was a Cabbage Patch Doll. Signed on the butt by Xavier Roberts, I must assume. Y’all. Do you KNOW how obsessed I was with Cabbage Patch Dolls as a child? I had SO MANY. So I am very familiar with them and they are…not small. The animal comparison was a chihuahua. I’ll let you sit there and imagine two chihuahuas wrestling it out inside your abdominal cavity.

How I’m Doing: I’m doing well. As I was telling a friend the other night, as more time goes by,  I am necessarily moving past the fear of them being born too early and moving more into the excitement of getting to meet my son and daughter soon.

The past week has been quite nice. Our school takes a break for the full week of Thanksgiving, which means my husband and I got to be home together all week. Who knows when the next time will be that we get to spend a stretch of days together enjoying our house and relaxing, just the two of us?

The All-Important Status of My Belly Button: As you might see in the photo, it appears my navel is moving into an outie position, but don’t believe everything you see! That’s just the upper edge of it protruding. Underneath that, the actual navel is still very much in. My skin occasionally stings with the feeling of being overstretched, but no new visible stretch marks yet. We shall see.

Movement: normally the babies kick up a storm, stretching out my sore muscles and ligaments and rearranging my organs. The other day, though, I had a little bit of a fit because, although they were moving, their movements just felt so quiet and subtle that I worried something was off. Was I only feeling one? Were they somehow weakening? So of course I monitored and counted their kicks and called L&D (it was a weekend day) and asked about it and the lady on the phone was like, it doesn’t matter how big or small the kicks are; any movement counts. Then an hour later I ate a bowl of spicy chili for lunch and the kiddos basically started flailing around like a couple of maniacs in there. So I guess I was due for a stupid freakout that turned out to be about nothing.

Doctor’s Appointment: My doctor came in the room today and the first thing she said was, “I can’t believe you’re still hanging on!” She said she kept calling in to L&D over the long weekend to see if I was up there. When she says stuff like this, I feel like a minor medical marvel, really. I’m maybe just a tidge more than 3cm and 90% effaced at this point, not much if any progress from last week. So, we are still just waiting for labor to start!

I had the Group B Strep screening and a syphillis test (did y’all know they do that? I didn’t) today. In suspense waiting for the results! Heh.

In addition, I had my weekly NST. For whatever reason, the hospital was packed and understaffed and it took forever to get my test started. Once I was hooked up to the monitors, I quickly became REALLY uncomfortable. I was getting back pain and cramps in my sides and tons of BH contractions and I hated to try to move because I didn’t want to lose either baby on the monitors. I eventually had to shift around a few times, though. The test wound up taking maybe two hours all in all because additionally they weren’t getting the complete data on one baby so they kept extending the time. I was so uncomfortable and hungry I wanted to cry.

I eventually got to leave and get lunch, however, and I’m now lying in bed typing this on my phone because that stupid NST test took it out of me and I don’t want to sit up with my laptop. The struggle is real.

Coming Up: Sunday, I will hit 37 weeks by my calendar, but my next appointment isn’t until the following Thursday. Will I make it that far? If I do, will I be begging for an induction, or will I go to 38? We’ll find out!