The babies are finally big enough to wear their adjustable, one-size-fits-all cloth diapers, which means we are finally cloth diapering for real! We had about a dozen newborn-sized cloth diapers to try out when the babies were smaller, but they never quite fit correctly. They worked well sometimes but more often than not they leaked pee out of the leg holes. Surprisingly, the bigger diapers don’t have this problem (yay!).

We’ve only been using the cloth regularly for a couple of weeks or so, but I thought I’d write down some of my thoughts and experiences so far. I always find other people’s posts to be helpful in thinking about how I want to handle new things like this, so maybe this will be helpful or interesting to someone else out there. I’ll likely post an update after a couple more months, once I know more about how the diapers are performing over time.

We have some BumGenius All-in-One diapers (AIOs) — a couple of the organic cotton variety Elementals, and a handful of the microfiber ones, Freetimes (solid colored stack on the left). These are expensive ($20-25 each), so I’m reluctant to buy a lot of them even though I really like them. AIOs are very easy to use and these seem to perform well. The microfiber Freetimes dry a lot more quickly than the cotton Elementals, which I appreciate, but it’s my understanding that cotton can perform better over time and has fewer potential problems with detergent residue and odor buildup. We’ll see. Right now they both work well on the babies and wash well.

We also have a lot of inexpensive microfiber pocket diapers — the made in China ones you can buy on Amazon. Most of these are the Alva Baby brand (lots of cute patterns, the middle two stacks) and some are Naturally Nature (solid colored stack on the right). These brands seem to be identical except for the label. These can be bought in six-packs for usually $40-50, but I got ours when the Amazon price temporarily went down to $28 for 6. It was a steal, for real. These have been performing well, too. They’re a little bulkier/fluffier than the BumGenius, as you can see in this photo where L is wearing one of the pocket diapers and E is wearing an AIO. 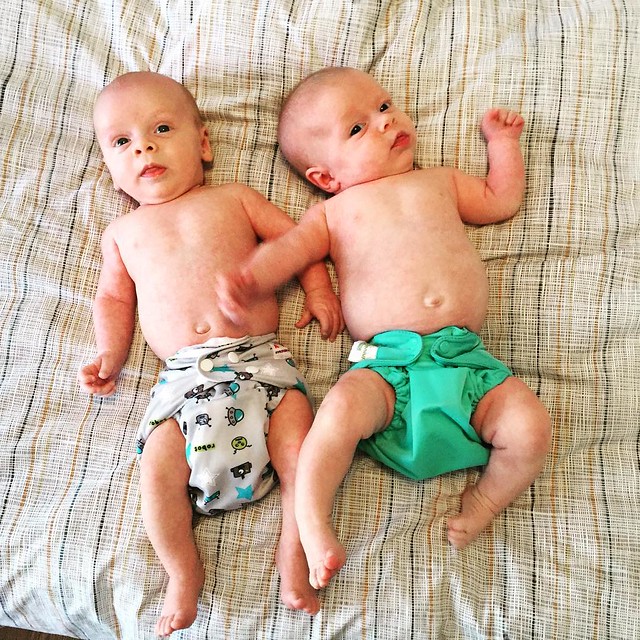 They wash and dry very easily, too. The only drawback so far is that with pocket diapers, you have to remove the microfiber insert from the pocket before putting the dirty diaper in the laundry bag. Everyone says it’s no big deal, but I don’t particularly like touching a diaper insert that is completely soaked with hot, steaming pee. Hey, that’s me, though. You also have to stuff the insert back into the diapers after they come out of the wash, which really isn’t a big deal but does take some extra time.

Everyone I asked said washing cloth diapers was simple and they were right. Super easy. I ignored all the websites that said to buy special detergent or OxyClean and I have been using original powder Tide. Here’s what I do: one cold wash  on our machine’s “casual” setting with half the usual amount of detergent. Then, one hot wash with the usual amount of detergent. Then, I tumble dry everything on low and that’s that. So far it’s been super easy.

Right now I’m washing diapers every other day. I put a load in at bedtime, run the second wash when we’re awake for the first night feeding, switch it to the dryer when we’re up for the next night feeding, and by morning we have a load of fresh diapers awaiting us.

I don’t think having twins makes cloth diapering any more difficult than it would be for just one baby. Of course, I’ve never had just one baby, so what do I know? Still, we need a few more diapers and the wash loads are larger, but other than that there’s no real extra work here as far as I can imagine.

My husband does most of the diaper changes when we’re both home and he doesn’t have any complaints about the cloth diapers, in spite of some initial skepticism about the extra work it might be. I really don’t think it’s been any extra work at all. For someone who was a bit reluctant to try cloth, he’s been totally fine with it and I think he appreciates not having to spend so much money on the disposables like we’d been doing for the first couple of months.

We’re still using some disposable diapers, though, at night. I think this is mainly because my husband doesn’t want to deal with removing inserts at night? I’m not really sure. If it were up to me I’d keep using cloth at bedtime, but enh. I don’t really mind at this point.

While using disposables, our biggest diaper issue was poop blowouts. these happened I would guess almost daily. Maybe a little less often than that, but it sure felt like it was happening all the time. Poop would escape the diapers up the back, out the legs, or even up the front! Cleaning poop out of a baby’s belly button is not exactly something I’m dying to do on a regular basis, you know? Since we switched to cloth, we haven’t had a single poop breach. [knocks wood] There have been one or two minor pee leaks at the back waistband, but nothing major. Just a slight dampness. I think it might have been an issue of the absorbent layer being slightly exposed and thus wicking liquid out into the babies’ clothes — in other words, simple user error. I am trying to be more careful about tucking that insert all the way in. Still, I’d much rather deal with a slight pee leak than a poop blowout. ANY DAY.

My favorite thing about cloth diapers so far: they’s just really cute. What can I say? It almost makes me look forward to diaper changes and laundry. You can’t really argue with that.