We have been enjoying the fall lately. Here in Alabama, the weather is still regularly in the mid-to-upper eighties, but I think we’ve had two or three cooler days so far. See evidence below: I actually wore a jacket to the pumpkin patch! 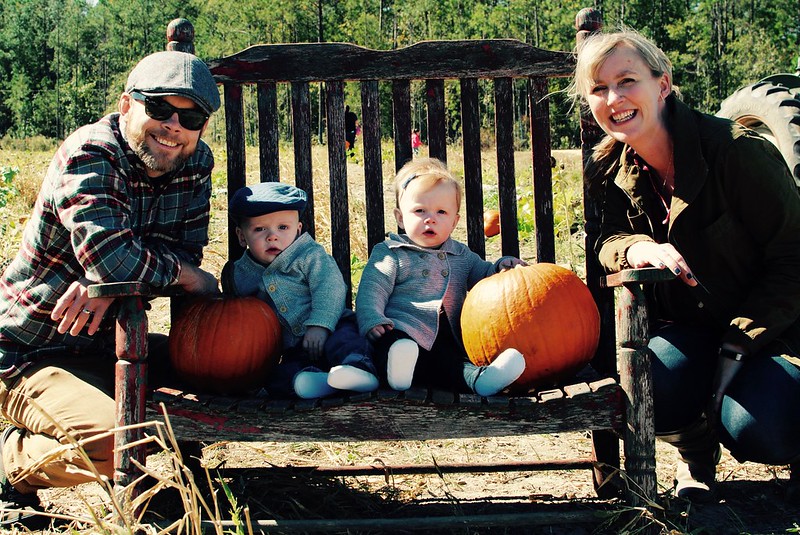 This was my first time visiting an actual pumpkin patch on an actual farm (as opposed to buying my pumpkin from a giant bin in front of the grocery store). It was a really pleasant day to stroll around and enjoy the fresh air and take pictures. I’m sure we’ll do it again — the babies were still too little this year to enjoy some of the kid stuff they had available (pens of baby goats & pigs, a big slide, hay bales to climb on, etc.), but they’ll have a blast next time. 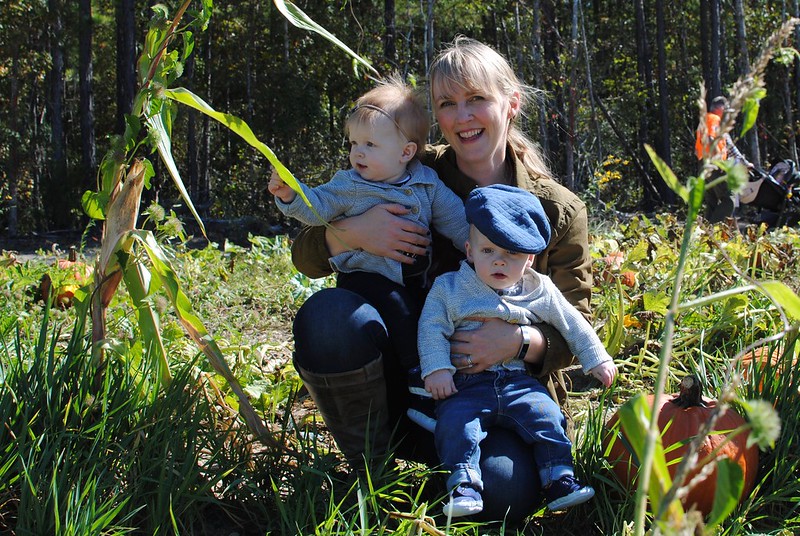 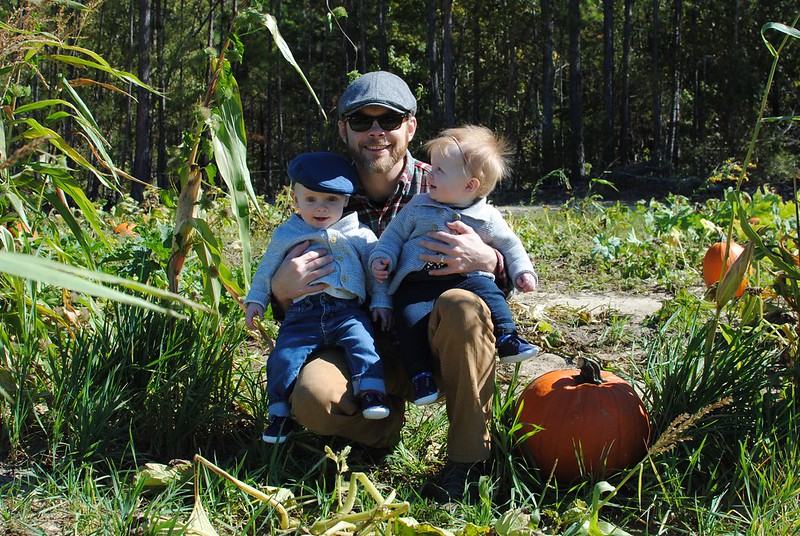 We came home with a couple of pumpkins for the front porch (which we didn’t carve — I’m just not that into carving, plus they last longer if you don’t) and the strong desire for some pumpkin muffins, which I made. Successful outing.

Halloween was really fun, too. I mean, can you EVEN?!

I’d been feeling all this pressure to come up with some really cute thematic twin costume and I kept coming up empty. Some year we’re going to do Luke & Leia for them and Darth Vader & Padmé for us, but we figured that’s a better idea for when they’re older. This year, we just didn’t come up with any ideas we really liked. Ideas that were suggested and then vetoed: lobster and chef, shark and surfer, bee and flower, etc.

At one point, we had nearly decided on ordering a matching pair of pumpkin costumes from Amazon, but we decided to sleep on it. The next day, the pumpkin costumes we liked had sold out and every other pumpkin costume was either not available via Prime (and wouldn’t ship until November) or was not in their size. THWARTED! Everything else we thought was cute on Amazon was crazily overpriced (like, $40 or more PER COSTUME, which is insane).

In desperation, I checked the Halloween aisle at Target and happened upon the elephant and the giraffe. Guess what Wubbanubs they happen to have and love? An elephant and a giraffe.

THEY COULD DRESS AS THEIR BINKIES, YOU GUYS. And so they did.

Trying the costumes on them for the first time was one of my best parenting moments so far. Each of them was absolutely DELIGHTED by the sight of the other twin in costume. They just looked at each other in amazement, grinning and giggling and eventually trying to grab each other’s faces. It was hilarious and adorable and so, so sweet. They’re the best babies.

On Halloween evening, it was 88º and I was wondering if we would regret the warm, plush costumes, but the kiddos did great and didn’t seem to mind at all. We went out for pizza and then explored the downtown trick-or-treat, checking out people in their costumes and hanging out with a few friends who’d also brought their kids. There were tons of adorable costumed babies being pushed around in their strollers and the whole thing was fairly delightful.

Next year, I suppose we’ll do the neighborhood trick-or-treat. Our neighborhood is really perfect for it (sidewalks, lots of families, pretty safe), but it didn’t seem like a good fit this year. Honestly, I just didn’t feel comfortable knocking on doors to basically just ask people to admire my kids and not actually collect any candy. E&L are still too little for candy and it would have felt like collecting candy for ourselves. Well, it would have ACTUALLY BEEN collecting candy for ourselves. Which, yeah, I like candy. But I have a job. I can buy my own candy.